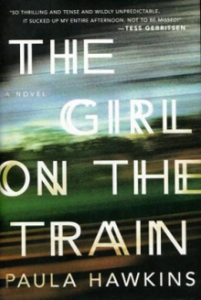 Sophia Jortner
Recently, I finished reading The girl on the train, a 323 page novel by Paula Hawkins who lives in london, and has been a jouralist for fiftee years before turning her hand to fiction. The Girl on the Train is a #1 New York Times Bestseller and is soon to be major motion picture. Although, as a fantasy lover this type of books. i wouldn’t normally pick out but it seemed so interesting and I couldn’t resist reading it. The reason why I read this book is because on the front cover it showed half of a girl with a forest. Automatically this interested me. At first I didn’t really think it was going to be a good fantasy novel but I got this book for chirstmas and it realy interested me because the cover doesn’t really show anything about the book which isn’t very common. As I kept on reading this book the plot got thicker and thicker and started to get very suspensful. This led to the book to get very intense and even more unpredictable. And the book had so much moments that made your heart skip a beat. When I finished this book I had so many thoughts that I had to think about myself  that I couldn’t figure out at the end because it was such a suspensful ending that wasn’t what I expected.

In the novel there are two perspectives Rachel, who has take a commuter train every morning every morning and night. Everyday she passes by homes. One of the homes that she passes by is a house that is owned by “Jess and Jason.” She doesn’t know who they are but all she knows is that every morning she sees the on their deck eating breakfast until one day she sees something different that changes everything.  The other perspective, a girl named Anna was married to Tom. Anna had just had a kid to Tom knowning that his ex wife was Rachel who got devorced to Tom after drinking problems. But, everything quickly changed when a girl named Megan went missing. Megan was “Jess’” and that is who Megan saw every day on her train. She say Megan with someone. It wasn’t “Jason” and that is when Rachel decided to go to the police. When she did things took a turn for not only Rachel, but for Anna too in very different ways.

The climax of the plot, was a very big plot because the characters in the story (rachel, Anna, Megan, Tom) were all connected in different ways. Although they were all connected in one crime they all had very diffrent parts in it. Some were innocent and some were not very innocent. At all.

I like the way that the author made each characters personality and characteristics show a lot. It showed how Feyre, a kind, loving, and hardworking person she was and how much she did for the ones she loved.  It showed how Tamlin was a strong, smart, and cunning man and also as welll go beyond what he is capable of doing for the ones he loved. It also showed how the Lucienwas and how he always believed that nothing was impossible and was laid back and aways knew things would get resolved and most of all believed Feyre and Tamlin every step of the way. He most of all was a person with such good personality traits  and I love how the author showed that.

Finally, I was interested in this passage “I get into bed and turn the lights out. I won’t be able to sleep, but I have to ty. Eventually, I suppose, the nightmares will stop and I’ll stop replaying it over and over and over in my head, but for right now I know that there’s a long night ahead. And I have to get up early tomorrow morning and catch the train.” (pg.323)

What I like about this passage is that it is the last thing written in the book. It was kind of a closing, and very calm one after all the mess and heartbreaking moments in the book. I was very impacted after reading the book. It wasn’t really something that I had gone through myslef, obviously, but after reading it I just sat there and thought to myself how could this every happen to normal people? Even though this isn’t a book I woud normally read it is one of those books that you don’t have to like the genre of that book, but the book itself is impacts you so much that you end up really liking it. It is one of the very few books that I actually get mine blowned by. I thought that this book might not have any big lessons. The way that I interpreted the book was very different than I normally think of books. I got a lesson out of this book that was something that I actually think about now. It’s never to expect something out of a person and never to assume a person is innocent. It isn’t a lesson that I could use on a everday bases but it is very valuable and overall this book is so amazing! I am so happy that I read this book and definetly would rate this book a 9.5/10!!!