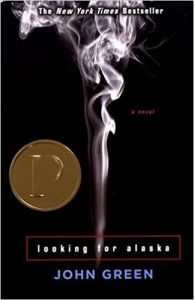 Disclaimer: If you are sensitive on the topic of death, I would recommend not reading this.

Not too long ago, I finished reading a book by the name Looking for Alaska. It is a 221 paged realistic novel written by John Green. John Green is an award-winning, #1 bestselling author of Looking for Alaska, An Abundance of Katherines, Paper Towns, and so many more amazing books. He won several awards such as the 2006 Printz Award for his sixth novel Looking for Alaska. Although writing for John Green is a job, that he loves, he had eventually picked up the habit of becoming a Youtuber. John has created two very well know channels by the names VlogBrothers and Crash Course. These channels aren’t only run by him, his brother Hanks John is also in the works of these channels. Anyways, the true reason for why I tried this book out was because I’ve grown very fond of John Green’s writing. The way he portrays the characters and develops them overtime just makes his books seem very realistic. I’ve already read Paper Towns and Fault in our Stars so I had to read more.

The storyline of this book starts with the main character Miles Halter is obsessed with famous last words and tired of his safe life at home. He leaves for boarding school to seek what the dying poet Francois Rabelais called the “Great Perhaps.”  Later on, he settles into the school, but has zero friends, until he finds out he has a roommate by the name Colonel. Colonel is a careless guy who doesn’t care much expect to have fun. He shows Miles to his other friends one being Takumi and Alaska. As soon as Miles meets Alaska he is love struck. Yet he tries his best not to show it. Afterward, Miles becomes great friends with the group and tries to get even closer with Alaska. Time keeps going by and Miles changes personalities and turns into a careless teen, as well. He goes around with his close friends, drinks, and smokes. He even pranks the principal, but his feelings for Alaska keep growing. Then a big accident changes all of that.

I was surprised when Miles and his friends were sitting around and Alaska pulled a cigarette out and quickly finished it. Miles was astonished by how fast she smoked the cigarette so he asked her “Why do you smoke so damn fast (pg.44)?” she responded with this line, “Y’all smoke to enjoy it. I smoke to die (pg. 44).” That line really hit me. Alaska flat out said she wanted to die. No one said anything. I can’t imagine a friend saying they don’t want to live so casually. That gets me wondering has Alaska said this before? We know that Miles has only really known Alaska for about two months, so was she saying this to Colonel and Takumi before Miles came. If so, have they given up on trying to stop her from saying stuff like that. It just bothers me that they didn’t say anything to her when she said she wanted to die. I can just imagine the silence that lingered after Alaska said those very words. Did that statement make anyone’s skin crawl? Friends are there for support, but I guess they just didn’t know what to do.

I liked the way the author creates this dialogue for the characters. The dialogue really illustrated their personalities, and I think that really helps me connect. Personally, I think it’s very important for the reader to understand the characters and have a connection with them. For instance,  when the whole group was together they spend the entire night just talking about stuff that had occurred in their lives. First, they went in a circle talking about a memory in their life that was the best. Miles was the first to go. “Best day of my life was today (pg. 115).” This straightforward answer shows that Miles isn’t the type to do crazy things, and his life is very simplistic. On some levels, I can relate, and I just start to feel like I’m apart of this book, which makes reading more fun. Soon enough it was Colonel’s turn, he said “The best day of my life hasn’t happened yet. But I know it. I see it every day. The best day is when I buy my mom a huge house (pg. 116) …” That statement clarifies Colonel as a caring person. Although throughout the book we see him as a reckless teenager, deep down, he’s different. It’s insane how dialogue can really change the way a reader views characters in a book. Eventually, they went through the whole group, and Alaska brought up how they should talk about their worst day ever in their lives. She volunteered to go first. “The day after my mom took me to the zoo . . . it was a Friday . . . I came home from school . . . She gave me a hug . . . I went into my room . . . then she screamed . . . She was laying on the floor holding her head and jerking . . . I should of called 911 . . . finally she stopped jerking . . . I thought she had fallen asleep . . . my dad got home an hour later . . . but by then she was plenty dead. Aneurysm. Worst day. I win (pg. 119) . . .”  When I was reading this part of the book I was so shocked. I felt the way she was saying it was so unexpected. She was calm wasn’t crying and once she was done talking she said she won the “worst day” game. This section of the novel was just showing that Alaska is broken. She doesn’t know how to deal with her emotions so she kind of just addresses them so casually. I’ve talked about before she said she wanted to die, maybe it’s simply a cry for help and she wants her friends to do something, but doesn’t know how to tell them. Alaska is a girl who is hurting from something that has happened to her many years ago, and she isn’t healing. I use to believe that Alaska was joyful and wanted to live on the edge, but now I’ve started to see a darker side to her. That just proves how dialogue is so powerful.

The theme of this book is death. Throughout the pages, there are key parts that relate back to death being the main reason for this novel. Alaska is the character that represents it. She brings the confusion and sadness that can come with death. It is what is apart of her life. She talked about her mother passing away. Miles even had an interesting obsession with famous last words. “Thomas Edison’s last words were, It’s very beautiful over there,  I don’t know where there is, but I believe it’s somewhere, and I hope it’s beautiful (pg.75).” Looking for Alaska does not put a damper on things, but it does enlighten the darkness of death. It shows that fact everyone thinks about it.

“Imagining the future is a kind of nostalgia . . . You spend your whole life stuck in the labyrinth, thinking about how you’ll escape it one day, and how awesome it will be, and imagining that future keeps you going, but you never do it. You just use the future to escape the present  (pg. 181).”

The labyrinth symbolizes problems that humans go through. For Alaska, her labyrinth was her mother’s death. She was so caught up in it that she was often sad and never happy. During the book, she talked about leaving the labyrinth and how she always imagined the feeling of just letting go. She kept thinking about the future just to simply escape the present. I feel this could relate to so many different people. We are all stuck in a labyrinth, but the thing is we just need to naturally accept it. Hope is what drives us.  If we get stuck in the future we will never leave the labyrinth. After analyzing this book I realized how much meaning it truly holds. I think people over look the novel and don’t really consider what they are reading. I loved it. Looking for Alaska is a 10 out of 10. I would read this novel again.

4 thoughts on “Letter Essay #6 – Looking for Alaska By: Claudia M.”