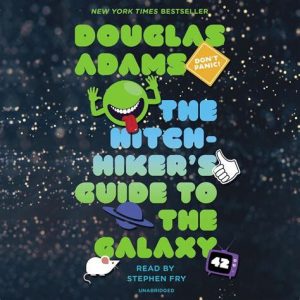 Stop everything you’re doing and read Hitchhiker’s’ Guide to the Galaxy. Hitchhiker’s’ Guide is a 216 page, non-fiction, action adventure, by Douglas Adams. Sounding like something out of a David Bowie song Hitchhiker’s’ Guide is about 4 intergalactic misfits and one depressed android that meet up in a strange way and go on a crazy journey. If you take nothing out of this Letter-Essay about why you should read Hitchhiker’s’ Guide please read it, it has a big, yellow sign on it that says “DON’T PANIC.”Thats sound life advice. Another compelling reason to read this NY Times bestseller is that it gives the answer to life! That is a very compelling reason! As odd as it sounds, one of the best book sources is my Piano Teacher. He has recommended one of my other favorite books… ever too: Piano. After reading many lengthy non-fiction books, I was all aboard for a wacky, unorthodox, gut busting, comedy, and Hitchhiker’s’ Guide delivered. So stick your thumbs up to the stars and ready for a crazy ride.
Our story starts in West Country, England with a lazy English morning… where everything goes terribly wrong for everyone: The English Development council, Arthur Dent, Arsenal and the world. Right before the world is destroyed by a horrifically stupid but barbaric alien species called Vogons an alcoholic, space hitchhiker, posing as an aspiring actor, named Ford Prefect (and longtime friend of Arthur’s) shows up unannounced to bear the not-so-nice-news of the earth soon-to-be fate.
At the same time somewhere else in space, Ford’s semi-cousin: Zaphod Beeblebrox, the ex-hippie, convicted crook, self publicist… and oh yeah, President of the Imperial Galactic Government had an idea (that’s never a good thing). He wanted to steal the Heart of Gold. The heart of gold is a very impressive looking spaceship that has an amazing thing called the improbability field that can do impossible things like turning all the occupants into penguins, or turning some of the ships interiors into the quant English countryside, (or beat Mr. Jockers or Mr Fedak in chess… every time)! Quite like one of my favorite Michael Scott quotes “And I knew exactly what to do, but in a much more real sense, I have no idea what to do.” Zaphod knew he wanted to go to Magrathea (the planet building planet for the 1%). But he had no idea why. So Zaphod did as Zaphod does, steal stuff and do stuff that he has no clue why his doing.
Arthur and Ford had been able to hitch a ride with ironically the same beings that destroyed their planet. Staying on the theme of bad luck, after they accidently disrespect the vogon captain they are thrown in the icy abyss of space, and have 30 seconds to live. To be saved something unlikely to happen would need to happen, something improbable, something impossible.
As Zaphod and his girlfriend Trillian are hurled through space and very high speeds the ship stops for a second and opens bay 234 to pick up something. They eventually find out that its Zaphods cousin and Trillians former boyfriend. Will it be a friendly reunion? Why were they picked up? Will they get to Magrathea? How do you beat Mr. Jockers or Mr. Fedak in chess? Will Zaphod be caught? Will there be any other surprises? When will they eat? Read Hitchhiker’s’ Guide to find out.
I liked the way the author make the book nonsensical and unpredictable. After reading many long books about presidents (which I enjoyed) I was more than ready for a light, fun book. I enjoyed every second of it. I noticed how the author put A LOT of irony in the book. This made it more fun, and had me laughing for a long time. I was interested by the passage: “The cabin [of the Heart of Gold] was white, mostly oblong, and about the size of a smallish restaurant. In fact it wasn’t perfectly oblong: the two long walls were raked round in a slight parallel curve, and all the angles corners of the cabin were contoured in excitingly chunky shapes. The truth of the matter is that it would have been a great deal simpler and more practical to build the cabin as an ordinary three-dimensional oblong room, but then the designers would have got miserable.” This passage just goes to show how when they have the awesome power of the improbability field, but they choose to focus on something unimportant, but funny!
I would rate this book 7.5/10