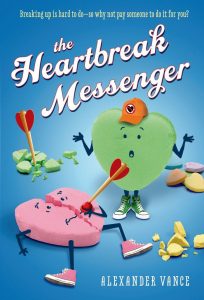 Recently, I finished reading The Heart Break Messenger a 283 page novel by Alexander Vance, an author that isn’t well known but has wrote only 2 books that include: The Heart Break Messenger and behind the canvas both super good books! Alexander Vance has always been into writing and reading books as he states “I read the Lord of Rings trilogy for the forth time” At first, I saw this book and was ery intrugued. I never usually pick out these type of books because I usually don’t like this kind of type of realiztic fiction. But, I read the back and it seemed interesting but still I didn’t really know what to think of it. I expected to only find myself reading the first few pages and puttin git back but it ended up being reall good. I really thought it was funny and interesting how Quentin “the heart break messenger” is just a normal kid until he did what most people don’t normally do.

In the novel, Quentin is a boy who is just like almost every teenager wh wanst some moeny. He was talking to one of his friends who didn’t want to break up with their girlfriend. So they offered Quentin a deal, if he told the girl that his friend is breaking up with him then he would recieve money in return. Unable to pass up this deal Quentin said yes. Soon, after a while news started to catch on and everyone wanted Quentins help. Although, he didn’t want this to happen he didn’t mind getting money because after all thats what started it all he continues doing his job being the “Heart Breaker”. As time passes he realizes what he’s doing and does not want to do his job anymore. As time goes on he soon is confronted by the victims of his job and now is contempating whether it is worth it or not. As he continues his job he is also faced with problmes of his own that could end friendships of his own.

The climax of the plot, was a very big plot. Although there were little bits of plots here and there that was very suspensful. It was interesting to see Quentin do his “job” and also see how he was handling his own relationships and balancing his own friendships and relationships. I thought that was one of the best part because I like when you can compare the charcters from the beginning of the book and at the end and see how much they have grown.

I liked the way that the author made each character whether it was one of the people Quentin sent the heart break message too, or his friends the author still made the characters have a personality even though they weren’t a big part of the book. It showed how Quentin wasn’t just a heart breaker and wanted lots of money but it also showed a side of him that was kind and nice and cared about the people around him even though he was gonna send them a heart breaking message. It also showed how his best friend Abby, his best friend really cared about him even though she knew what he was doing but still stayed loyal to him even though their friendship wasn’t always in a good place.

Finally, I was interested in this passage “Yeah. I know when to call it quits.” I smiled to myself. The heartbreak messenger had retired, but that just meant I’d have time for other… business plans. “Besides, I’ve got something even better in mind.” (pg. 283)

What I like about this passage is that it was so original and it tied up the story well, and for me this story, and this passage was almost like a really good conclusion. It had a introduction and then a prblem but in the end it was all fixed but at the same time still left some suspense for the reader. I thought that this book was a really good and fun read! I am so happy that I read this book and definetly would rate this book a 8.5/10!!!