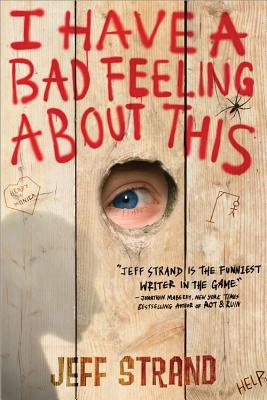 Not to long ago, I completed a 238 page Realistic Fiction book, titled I Have A Bad Feeling About This. This book was written by an American Author, born in Baltimore, Jeff Strand. He usually writes humorous horror novels, but this book is somewhat of an acception. He has been nominated 4 times for the Bram Stoker Award, an award for Dark/Horror fantasy writing. The reason I decided to read this book was because I was in desperate need of a break from the current series I am trying to finish, A Series Of Unfortunate Events. So, I wanted something much different from that series, and this book most definitely fulfilled that need.

In I Have A Bad Feeling About This, a typical teenage boy, Henry Lambert, loves to stay inside and play video games. But, his dad does not like that. (Like every parent) So, he sends him to a camp. Strongwoods Survival Camp. But, Henry’s friend is excited to attend this camp. So, it he thinks it should not be so bad. When they arrive at the camp, it is in the middle of nowhere. And the counselor they have, Max, is a little off. Which makes sends him bad vibes. Which is why the book is called I Have A Bad Feeling About This. But, while max is trying to turn them into tough survivalists, some unexpected people drop by in the camp. So their new found skills would need to be put to the test.

My biggest question would be, Why did the author make the main character a wimp instead of a massive nerd? I ask this question, because the novel would have been a lot more entertaining if he was a unbelievably smart. I say this because I would have liked it better if whenever he was insulted or challenged it would have been hilarious if he made a comeback with some smart answer that the person involved with Henry would not understand. I like when this happens in the movies, and it would have been even better in this book.

I was surprised when I saw the first survival tip in this book. When I picked up this book I just expected a novel that would make me laugh through dialogue and action. But, when I saw these odd survival tips it really made my reading experience a whole lot better. One of my favorite survival tips in the whole book is without a doubt, “An empty shampoo bottle can be used to make about one-eightieth of a raft. So when you go hiking be sure to bring eighty empty shampoo bottles.”(pg.16) It is funny because of the sarcasm, the author obviously knows no one will bring 80 empty bottles of shampoo on a hike. But, it being in the book just gives it that little touch.

I would compare this author to James Patterson. I would compare them because the both wrote similar books. James Patterson wrote IFunny. While Jeff Strand wrote I Have A Bad Feeling About This. They are similar because they both have teenagers as main characters, and in both of the books those teenagers are going through some type of conflict. But, what makes these conflicts super similar is that they use humor to get through the conflicts.

Finally, my favorite passage in the book is when Max sees girls from the camp down the street in the barracks that Max’s campers should be in. “Max burst into the barracks. Henry knew they were making way too much noise to not get caught, so he’d expected this, though the machine gun was somewhat less expected. “Who the hell are you?” Max demanded and then he opened fire into the ceiling. Everybody screamed and ducked for cover. Monica grabbed Henry’s arms and pulled him under the cot.”(pg. 980 This is my favorite passage because the author did a great job at portraying max as crazy. Many authors would not have put something like this into one of their books, but I guess this author decided to anyway. It was a great idea anyway. Someone who brings a machine gun into a camp and shoots out a whole ceiling can definitely be portrayed as a nut job. Overall, I give this book a 9/10. It was a really good book to read, and it was so much more than I expected it to be. I recommend this book to anyone who would come across it.