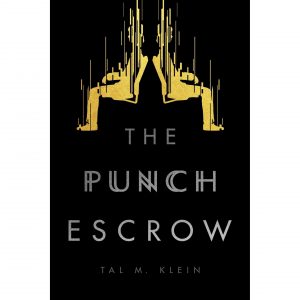 Recently, I have finished reading the book The Punch Escrow, a 356-page science fiction novel written by Tal M. Klein, who was born in Israel, grew up in New York, and lives now in Detroit. One of his two daughters, Iris, wrote a book called I’m a Bunch of Dinosaurs. It became one of the most successful books on Kickstarter. Tal explained this to Iris by telling her, “your book made lots of kids happy.” Iris asked Tal, “Daddy, why don’t you write a book that makes lots of grownups happy?” which inspired him to write The Punch Escrow.

The Punch Escrow is a new and growing science fiction novel, compared to books by other famous sci-fi authors such as Ernest Cline and Andy Weir. It is “dubbed” the next Ready Player One by former Warner Brothers President Greg Silverman. It is also in film development at Lionsgate. Brian Truitt of USA Today says The Punch Escrow is a novel, “Featuring themes similar to Blake Crouch’s Dark Matter, the dense sci-fi feel of a Michael Crichton thriller and clever Douglas Adams-like charm, the book posits an intriguing future that is both inviting and horrific.” My favorite genre is currently science fiction. I had read Ready Player One by Ernest Cline and was looking for books similar to it. I found the Punch Escrow and picked it up to see if it would be interesting.

In the novel The Punch Escrow, the year is 2147. Many advancements in technology have been made. Nanotechnology has been improved to control aging. Mosquitoes have been genetically engineered to consume carbon fumes instead of blood, ending air pollution. Comms have been created and are the main form of communication. (a comm is a “hybrid mesh of stem cells and nanites” that “interact with the aural and visual centers of our brain, augmenting our eardrums with audio and our retinas with video” (p. 19)) Most importantly, teleportation has been made to be the main form of transportation, offered by International Transport (IT), one of the largest corporations in the 22nd century. All Joel Byram wants is to save his dying relationship with his wife, Sylvia, an important worker at IT. They plan a trip to Costa Rica with no teleportation and no distractions. However, when Joel is transporting to Costa Rica, he is duplicated. Joel is stuck in New York with no comms while Sylvia is in Costa Rica with Joel’s duplicate, who believes nothing has gone wrong. So Joel must now fix his marriage with a woman who has two of him and figure out what happened and why IT doesn’t want anyone to know about it.

I noticed how the author didn’t make the main character a strong, heroic, perfect type person, as you would typically see in sci-fi/fantasy/adventure books. The Punch Escrow’s protagonist is Joel Byram, a know-it-all salter, a person who teaches technology to act more human. He listens to 1980s new wave music, such as Culture Club, and his marriage is failing. You would typically see a character like Thomas in the Maze Runner, Katniss in the Hunger Games, or Harry Potter. I liked how the characteristics of Joel were not necessarily all great, but he had a determination to get to Sylvia and a stubbornness to not give in to influence from others. For example, when Joel learns that Sylvia was kidnapped, he says: “‘I want out. Get me the f*** out of here, you hear me? I’ll take my f***ing chances with IT, with the Gehinnomites – I don’t care. My wife is out there, off grid, and everyone is sitting around, scratching their a**es.’ I got up and walked to the door… ‘Let me out of here!’ I was tearing up, weeping, desperate to appeal to their humanity. ‘I have to find Sylvia, please. Let me out!’” (p. 169). I thought that this scene really demonstrated Joel’s determination and love for Sylvia.

I’d say the theme of this book is both the influences of technology on society and self awareness. First of all, teleportation had a negative effect on Joel. It started the story’s problem and caused deaths and violence to follow. This story portrays teleportation, and most technology, to be bad. Today, many people can say that technology has a negative effect on us. This idea is universal and transcends all time periods. Science fiction often portrays society in the future and the new technology they develop. Overall, I believe most sci-fi novels, like The Punch Escrow, contain a theme of the effect of technology on society. Also, the theme of self-awareness is brought up, especially because Joel meets his duplicate and sees firsthand how he acts and thinks and presents himself to the world. Also, he noticed how he was different from Joel2 (what he calls Joel’s duplicate in the book). For example, he notices “And that’s when it hit me. Of course I understood that Joel2 felt betrayed by Sylvia. For lying to him about Honeycomb, for leaving him to fend for himself in Costa Rica. I wondered in that moment what I’d wondered since I’d met him, and what I wonder still: Was he angry because, deep down, he thought I was the real Joel and he was just a printed copy?” (p. 285). This made Joel analyze himself and put himself in Joel2’s shoes and think how he would react in Joel2’s situation.

I liked the way the author made sure to explain all of the technology and science behind the story. Klein made sure to backup all of his fictitious technology with a real explanation that could one day possibly be true. For instance, he explained how mosquitoes (as mentioned before) were genetically engineered. Klein writes: “… scientists at a company called Oxitec patented a mechanism for genetically modifying cells to produce a protein that stops  mosquitoes from functioning normally. This technology was a precursor to modern gene-editing techniques that enabled the eventual conversion of mosquitoes, specifically the Aedes aegypti (known as the yellow fever mosquito prior to its genetic rehabilitation), into vaccine carriers, and more recently into steam reformers.” (p. 25). Klein would go into even more in-depth explanations of the technology that he invented for the story, as if it were a science textbook for students in the twenty-second century society that he created, but just enough so it didn’t get the reader sidetracked from the storyline. Although the explanations were a bit complex, and are meant for adults to comprehend, they gave me a sense of what the technology was.

Lastly, I was interested in the passage where Joel is talking to an IT employee named Pema, one of Sylvia’s friends, after he was duplicated, about an option that Corina Shafer, the head of IT, is going to give Joel once he learns he was duplicated. Klein writes:

“”I thought you said you were going to help me.”

“I am helping you. Choice is what makes us human. It’s what separates us from technology. I’m offering you a choice.”

“Could’ve fooled me. So, let me get this straight: Corina Shafer herself is going to come here and ask me to clear myself, whatever that means, and I’m supposed to convince her to… what exactly?”

Pema considered that question for longer than I’d expected. “Imagine you’re a bus conductor,” she finally said. “Something goes wrong with the GDS, so you’re manually driving the vehicle. Suddenly someone steps in front of you. Naturally, your instinct would be to switch to manual override and swerve to avoid hitting them. Even if it meant that your bus would be permanently disabled, you’d probably still do it to save the person. Right?”

“What does this have to do with anything? Was Sylvia on a bus?”

“Now imagine that it’s not just your bus that would be disabled, Joel. By saving that person, you would destroy every bus in the world. Forever.”

I opened my mouth, unsure of what would come out, but Pema didn’t wait for an answer. “It’s a difficult problem Joel. Kind of a Hobson’s choice. If the world finds out what you’re about to hear, teleportation is probably done, closed for business forever. Clearing you is an alternative. Everything remains as is, the status quo unchanged.”

“Wait, so clearing myself means killing myself?”

“Look,” I said, hoping to reason with her. “ All I did was miss a very important date with my wife, because of a situation I had no control of. And she’s probably worried sick about me, but I can’t tell her I’m okay because my comms aren’t working. I don’t know s***, and I’m stuck in a room with a woman who basically told me to run myself over with a bus!”

I like how this passage contains very realistic dialogue. Also, I like the line where Pema states: “I am helping you. Choice is what makes us human. It’s what separates us from technology. I’m offering you a choice.” This seemed to tie into the book, with all of the technology advancements taking place and Joel’s need to know he’s human. I enjoyed reading this book. I give it a 7 out of 10.