Recently I finished reading The Call of The Wild, a 290 page classic book by Jack London. Jack was an american author and journalist who became one of the first authors to become famous and wealthy from his fiction that he wrote amongst many of his writings.

The Call of the Wild is a well known classic. It was initially published as a serial. Serial means taking place in series, though that did not happen. This book was misunderstood as plagiarism, but after many editorial reviews and edits…it was able to be published and read by many. The Call of The Wild was meant to start off as a short story, but was then later loved by many. So, Jack London decided to continue it…and it now a well known classical book for pleasure.

Buck wants to go back home from working as a mail carrier dog through alaskan snow. But, he has to work extremely hard through rough alaskan weather in order to get what he wants. So buck then tries to find ways to escape during the night. Since being a wild dog and having been part of a pack, he had a lot of trouble surviving on his own. Which means he went back to the pack, and continued working. But that is not it…buck soon realizes that he will never be able to go home ever again, so he decides that he wants to defeat Spitz (The lead dog) and become Lead Dog of the pack. To do so, Buck violently works his way to be top, or superior of the pack.

I was really upset at the end of this book when Buck never actually goes home. I thought that when he was being taken away, that he would go home and do what he wanted…but he never got to. Throughout the book, there was this feeling that I felt that really made me think about how the story is going to be like. I had difficulty predicting events that mights occur in the story because it was so not what I had expected it to be. But, I guess that since there was suspense, it was kind of an exciting book to read.

I like how the author included perspetives of Buck. I think that if there was just one narrator the entire time, then the story would sound really boring. It defanitly would not have caught my attention at all, and I would not have read this book. This is a quote that caught my attention to demonstrate.¨I wish I could go home and belong to my real owner(pg 63).¨ I thought that this was important to add in because 1) it really shows how Buck feels (empathy) and 2) it shows the different perspective. Changing it up a bit so that it makes the story more interesting.

I wish the author gave more description about how each of the dogs of the pack felt when they were working, or fighting with each other. I think that a little more detail and description would have made the story a little more interesting, and the author could even take out the pictures and add description to it. Other then that, this was an amazing book and I really like it!

Finally, I was interested in this passage, when the owner of the wolf pack spoke to the dogs. Jack London wrote: “He must master or be mastered; while to show mercy was a weakness. Mercy did not exist in the primordial life. It was misunderstood for fear, and such misunderstandings made for death. Kill or be killed, eat or be eaten, was the law; and this mandate, down out of the depths of Time, he obeyed.”

What I love about this passage is that it really shows what the dogs life was like. They had to pull really heavy sleds in a pack everyday without a break, and then got sold for becoming too weak. These dogs would get upset with each other, and they would fight physically for what they thought was right. It was a really vicious time where the owners of the pack would not do anything about it, and with that said…the dogs would die because they were so aggressive. That was not good because every dog in the pack wanted to be Lead. But, there was only one spot…which went to the strongest, smartest, wisest, and most technical thinker. I am glad that I read this Classic! Call of The Wild is a 7 out of 10. I defanilty think I will pick it up again some time! 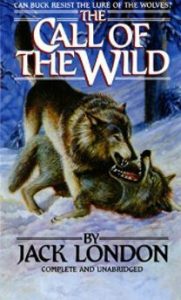