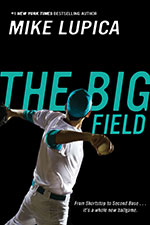 Dear readers of the blog,

Recently I have been reading the book, The Big Field by Mike Lupica. I recently read his book Million Dollar Throw  through a recommendation of one of my teachers and I really enjoyed reading it. Plus I have baseball fever because it’s almost Spring and baseball season is almost upon us. The genre of this book is fiction, and it is 243 pages long. The Author Mike Lupica is a newspaper columnist who is best known for his sports writing in the New York Daily News. Over the span of his career he has proven he can write for sports fans of all ages. He has “carved a niche as the sporting world’s finest storyteller.”  This can be seen is all his novels such as, The Bat Boy, The  Underdogs, a football story, and Summer Ball, a basketball story. Mike Lupica lives with his family in Connecticut with his wife and four children.  He can be seen weekly on ESPN’s The Sports Reporters.

I have to admit, I haven’t finished the book yet but I can’t wait. The book starts right off by just describing Hutch, the main character, as probably one of the best players on his baseball team, The Boynton Beach Post 226 Cardinals, an American Legion team. It is a 17 and under team who doesn’t want this to be the last game of the summer. They are playing the Palm Beach team and its a nail biter. During the game another name comes up on the team, Darryl Williams (D-will as he calls himself)  who is new and  seems to be just as good or better than Hutch.  Hutch’s best friend is also on his team Cody who seems to have everything in common with him. Both their families live in a not so great neighborhood in bright colored houses that needs painting, no central air, and are very small.  Right from the start of the book you can see there is something not right about the relationship between Hutch and his dad. It shouldn’t be this way because they seem very alike. Hutch’s dad went all the way to the minors and almost made it to the big field but got injured, well that’s what he told Hutch,  and ended back in Boynton going from job to job. Because of this, you would think that Hutch’s dad would want to go to his son’s games and want to be apart of his baseball career but that is not the case. He has nothing to do with Hutch, with baseball or anything since Hutch was seven years old.  You can see that Hutch can’t understand why and that it bothers him everyday. It is not until the middle of the book that at one practice everything changes. Hutch’s dad does go to a practice but it is only because he got there early for picking him up. He ends up helping Hutch’s rivalry, Darryl. With his smack talk remarks about how great his dad is teaching him baseball, Hutch has had enough and “like an explosion” takes Darryl down to the ground which ends up getting him suspended from the next championship game. Yes it was crazy upsetting for coach Cullen, his teammates, and for Hutch but it opened the conversation with his dad as to all the questions he was scared to ever ask. Why hasn’t he cared about him and his love for baseball? The answer began by his dad taking him off hours to his country club where he is a caddy for his second job. He finally tells him the truth, he never hurt himself in the minor leagues so he couldn’t play anymore, it was that “he wasn’t good enough.”  Is this the reason why he doesn’t want to get involved with Hutch’s baseball career because he doesn’t want what happened to him happen to Hutch?  Hutch finally tells his dad  the truth about his dream. It  is not someday to play in the major league’s,  it is a way to get a scholarship so he can get  out of Florida as fast as he could. It wasn’t the same dream after all.

I like the way the author writes in a way you can see in your mind what is happening such as during a game or a special moment between Hutch and his mom or dad. Lupica can really make you feel the feelings Hutch, the main character, has during a certain situation such as a game. He also makes you feel what Hutch  feels when there is a serious talk between his friends or parents. Lupica also  makes it so you want to  keep on reading by explaining just enough to keep you on the hook to see what happens.  For example, it makes you want to better understand  why Hutch’s dad who once loved baseball doesn’t want anything to do with it now when it comes to Hutch. Another example is the thrilling championship game.  Lupica keeps you on the hook because its not to the very end of the book when the game takes place. You will want to see if they win the state championship game.

A passage from the book that explains  why Hutch’s dad feels the way he does about Hutch  playing baseball is from his mom. “He wants you to keep playing for the love of it, not because it’s a means to an end. He lost that love along the way, back when he became convinced that the only thing that mattered was making it to the big leagues.” (p 164) It shows his mom’s perspective and the real reason  why his dad has acted the way he has and done the things he’s done.  She then goes into the reason why his dad works two jobs, to make sure they have money for Hutch to go to college. It ends up Hutch and his dad have the same goal, to make sure Hutch gets out of Boynton not by making it to “the big field,’ but by going off to school.

The book cover really shows by the title, The Big Field,  the two things going on from the beginning of the book to the end. The first one being the rough  relationship between Hutch and his dad. His dad thinks his son’s dream is the same as his, to make it to “the  big field,” but it’s not. It’s only the way Hutch thinks it can get him out of Boynton, by getting a scholarship to a boarding school in New Jersey.  The second reason beginning at the start of the book  is to make it  to the “big field’ for the championship game with Hutch’s teammates and best friend. This is what they have worked hard for all season long. They all have dreamed about playing on such a field.

I rate this book a 9 out of 10. I would give it a 10 but I feel like I need to get to the very end before I do that. I really enjoy all the books so far that I have read from the author, Mike Lupica.  It is on one of my favorite subject matters, baseball and one of my favorite author’s  I have read in 8th grade. The reading it is not too difficult. It is also easy to understand. I also like how you can vision in your head what the main characters are feeling and how you can relate to them. For example, waiting for the ball to be hit by the batter and how you get a rush when it’s  hit to you and you help get the batter out.  Many of the experiences you have had yourself and know what it’s like and it’s cool to see how others feel the same way you do in the same exact situation. I highly recommend this book to anyone who loves sports as much as I do.