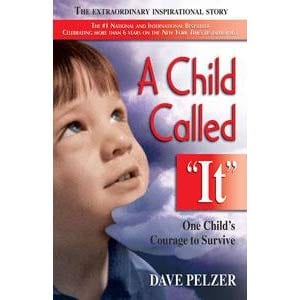 I have just finished the auto-biography 184 paged book, titled “A Child Called It.” This book was written by Dave Pelzer who is known to be the survivor of one of the most severe cases of child abuse in California History.  Dave was born in San Francisco, California and now lives in Daly City, California, while being the author of “A Child Called It” Dave is also the author to many other self-help books and other autobiographical alike. Another one of Dave’s books is called “The Lost Boy” which is more about his life as an adolescent and a sequel to A Child Called It. The author has won five awards with one of them being the JC Penny Golden Rule Award which he won in the 1990s. This horrific book talks about Dave’s story and everything he had gone through his childhood. Pelzer had three brothers and lived in an average house in San Francisco with his mother Catherine Roerva and his father Stephen Joseph Pelzer; his family made a decent amount of money since Dave’s father was a firefighter. Throughout Dave’s childhood, he was abused, mistreated, and beaten by his mother, who thought of it as a game.  Dave wrote about how his mother starved him, forced him to drink ammonia, stabbed him in the stomach, set him naked on a stove and forced him to eat his vomit. I chose to read this book because immediately I was hooked by the blurb on the back and I thought it would be interesting; I also felt like it would be something new since I have not read much about child abuse. I immediately wanted to know more about Dave’s horrible childhood and how he dealt with it.

“A Child Called ‘It’,” is a memoir written by a man named Dave, recounting the abuse he suffered throughout his childhood. Within a few years of his life, Dave felt like he needed to be a survivor because of what he was going through. He held on to everything as a sense of hope as his mother starting abusing him mentally, physically and verbally. At first, Dave’s punishments were small things like time-outs in the corner of a room. However, these punishments escalated quickly and took place whether Dave had actually misbehaved or not. The reasoning to punish Dave was illogical as Dave talks about in his book how his brothers would do the same things as him and yet they were not punished for it. Dave began to have such a fear of his mother, he was too scared even ask when the time-out was over.

As Dave got older, the abuse worsened. His mother created “mirror punishments,” where Dave would have to stand in front of a mirror and have his head bashed into it continually. He was forced to yell “I’m a bad boy,” while looking at himself in the mirror. Dave had always just wanted to be called a good boy from his mother but no matter what he did, there was no winning. Catherine would force Dave to find her misplaced items when she was just laying on the couch, and when he couldn’t find them he was punished and yelled at for not completing his task. Because of that Dave would close his eyes and imagine that he found her missing things and she awarded him with kisses, but that just wasn’t reality.

Furthermore, Dave never wanted more than for his father to do something about his abuse and help him. Stephen would try to treason with Catherine but he would always end up failing and not getting anywhere. But when Dave’s father was home his mom wouldn’t do as many punishments to Dave because she didn’t want to have her husband witness as much as what she would do. All throughout Dave’s childhood he held onto his father as his hope and how one day he would take Dave away from his family.

Unfortunately, that had never happened and instead, Stephen left by himself. Just as his dad is packing to leave “I knew what he was going to do. I knew why he had come home. As he stuffed his blue overnight bag, I began to cry inside. I wanted to become small enough to jump into his bag and go with him.” (page 149). The book goes into detail of Dave’s memories of the abuse and how he made his way through until he was able to escape.

Dave is a survivor who had gone through more than most people could ever imagine. He had lived through his mother’s games and survived when his mother did everything in her power to kill him. One thing that bothered me the most was how Catherine would not let Dave eat and if he did she would make him throw it up. I was extremely angered when his mother forced Dave to throw up the little bit of frozen meat he fought for at his school cafeteria, and after he did so, she scooped out his vomit from the toilet and put it in a bowl and had him eat it. That was DISGUSTING and reading those words made me want to vomit myself! I cannot ever imagine being forced to consume my throw up like that, and the fact that Dave’s mother did so is sickening and brutally harsh. “Chew it! Eat it! Eat it!” his mother snarled (page 67). The resolution to Dave’s problem-filled me with joy and I was so unbelievably happy that Dave’s school finally knew the truth about what was happening to him and finally, Dave opened up and was taken away from his mother for last. One time, child protective services had to go to Dave’s household because of a complaint from one of Catherine’s old friends. In order to address this problem, his mother told Dave that the abuse was over a few days. She behaved like everything was okay and did not hurt him. When the time came for the child protective services to come to the house, Dave said that his mother was not doing anything to him. After that, his mother went back to her ways and started beating him again, so the fact he was finally away from her pleased me. I loved how the author put the part of Dave telling the truth about his bruises to his school nurse and how he was rescued from his mother was towards the beginning of the book. I felt as if that was very useful because if I did not know that he would be saved since the beginning, I would be even more upset than I already was during the book, and putting that at the makes it more professional and like Dave is telling his life story. A Child Called It was one of the most powerful book I have ever read, and while reading most of the gory unbelievable things I always thought why? How could any parent ever do that to their child and torture them like that, especially how Dave’s mother was treating Dave’s siblings with lots of love and comfort while Dave is being beaten? The fact that Dave’s mother would force Dave to be trapped in a “gas chamber” in the bathroom as she filled it with ammonia and other bleaches like Clorox not allowing him to breathe is insane.

Because he was convinced that everything would go back to how it was when he was very little. After that, his mother went back to her ways and started beating him again so the fact he was finally away from her pleased me. I loved how the author put the part of Dave telling the truth about his bruises to his school nurse and how he was rescued from his mother was towards the beginning of the book. I felt as if that was very useful because if I did not know that he would be saved since the beginning I would be even more upset than I already was during the book, and putting that at the makes it more professional and like Dave is telling his life story. In this scene, Dave was sitting in the basement hearing the laugh of other children from outside and his family having dinner inside. I was struck by this passage “Inside, my soul became so cold I hated everything. I even despised the sun, for I knew I would never be able to play in its warm presence. I cringed with hate whenever I heard other children laughing, as they played outside. My stomach coiled whenever I smelled food that was about to be served to somebody else, knowing it wasn’t for me.” -David Pelzer (page 167). I liked how the writing in the passage was very meaningful and how it represented how Dave would feel every time he was forced into the basement or garage by himself very lonely, it shows the pain and the envy Dave had for his family and the people who don’t know what he’s going through and can’t relate to it.

Overall, I rate this biographical book a 10/10 as it is a story of someone’s horrible past and it shows everything that Dave Pelzer went through as a child and the horrific things he dealt with. This book also spreads the concern about child abuse and teaches people a lot more about it and how it’s such a serious issue, it also shows how you never know what someone is going through by just looking at them or not getting to know their home personal life more. I would like for as many people as possible to read this book because it really opens up your eyes on how some people live and what they go through, and it makes you thankful for what you have even more.