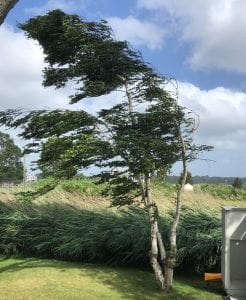 I woke up the morning of the storm and did what I always do: I read and drank coffee. And because I was at our beach cottage, I did so outside, listening to the birds and taking in the sea breeze.

It was early August in the turbulent year of 2020, a time when a pandemic changed the way we lived and an election would divide a country. But it was summer, and while the coronavirus had upended life for a while, July proceeded almost normally and my wife and I had just returned from the peace and bliss of our Block Island getaway.

This morning, I was in Old Saybrook, at my family’s small yet idyllic seasonal cottage. Six houses from a modest Connecticut beach. Daisy was making her daily rounds in her ancient ice cream truck. Kids were riding bikes during the day and jumping off the bridge at night. And a hurricane that was now a tropical storm was heading our way.

Not only is our cottage a short walk to the water but our backyard runs against a salt marsh. When we get wind, it rattles the window panes and bends the birch tree by the shed.

It is probably unsafe these days to be there during extreme weather events, but there is something about witnessing and experiencing something terrifyingly much larger than yourself, like a hurricane moving across the Sound towards you.

Fortunately, this storm, Isaias, had been downgraded by the time it spun up towards Connecticut, but it was still predicted to pack a punch. In fact, by the time it left, hundreds of thousands of people in the state would be cut off from electricity.

Powerless. Much like the way I had been feeling about a lot of things happening in the world. And while living temporarily without lights and appliances and the other creature comforts is frustrating, so is living and being cut off from our sources of happiness, like travel soccer games and extended family gatherings.

For the first time since forever, our small beach association did without a Fourth of July parade. Kids didn’t decorate their bikes with patriotic bunting; there were no hot dogs at the clubhouse afterwards.

But, on the morning of this storm’s arrival, on a Tuesday, I was sitting on our deck. My wife, Keri, and our daughter, Paige, were home, in Stratford, because they had volunteered to distribute food in Bridgeport the evening before. In Saybrook, that summer morning was cooler and cloudier than usual. From my deck chair, beyond the reeds lining the edge of the salt marsh, I could see as usual the small river that cuts into town. But, this morning – unusually – there were no boaters or kayaks. Things seemed still. The occasional salted air blown by the sea breeze rustled the reeds at our property’s edge while sparrows and red-winged blackbirds fought at the feeders while egrets and herons and gulls cruised overhead.

I was on the phone with my wife.

In Stratford, she and Paige were about seven miles inland, in a larger and much more sturdily built home equipped with an automatic generator. In Saybrook, our cottage is not even winterized, and sits just a few feet above the high tide line. Tons of rain in Stratford means the sump pump kicks in to keep the basement dry; in Saybrook that means possibly standing in the kitchen in rainboots.

The plan had been for Keri and Paige to return that morning to Saybrook. But, with the storm looming, Keri was (of course) pondering the practical idea of my son and I driving instead to Stratford to seek the relative shelter of our home. But, we’d been quarantined to Oak Ridge Road for months and I do, despite the risks, enjoy being in Saybrook during a storm . . .

Not the answer my wife had hoped for but probably the one she expected. After all, we had just celebrated 20 years of marriage. She waited a few seconds before responding.

“You think that’s a good idea?”

Good idea? Hm. Well, it comes from a good place, I think. From the sense of knowing it is good to be awestruck by Nature. To be made to feel small. Humbled. I always feel most grounded when I’m made to feel powerless in the face of Nature.

But . . . a Good Idea? Can I guarantee we will keep electricity and a tree won’t fall on our tiny Cape? Of course not.

That is out of my control. Most things are.

Earlier that morning, I had driven to a spot in Old Saybrook that overlooks a broad swath of the mouth of the Connecticut River. I run out there and back often. It was a landfill and now it is a park, with benches, and from there you can see, to the south, Long Island, and, to the north, the interstate and train bridges spanning the wide river. That view makes me feel small. I like it there. I watched the storm approach, then left to call Keri.

“I don’t know if it’s a good idea but I like being here during storms,” I said to my wife.

An hour or so later, the girls were in Saybrook with us.

That day, we did the things we do during a storm. We played card games and cooked a good dinner and watched and listened to the wind rattle the cottage. The wind lasted for hours, bending my favorite thin birch tree into a bow of submission, but never breaking it. A few times, Paige and I (but not Keri or Christian) would walk to the water only to get pelted by the sand being blown sideways; one time we couldn’t even walk halfway down the street before having to turn around. But, Isaias eventually left and the next day there were large branches down everywhere and I had to get out the tall ladder to saw down the remnants of the tulip tree and neighbors came out and we all chipped in and someone came by and carted away most of the debris in their flatbed truck. We never lost power.

Storms come and go. The summer had provided a sense of calm amidst the storm of 2020. That storm hit us full-speed in March and then we seemed to be in its Eye during the summer months. It would pick up again in the fall. By Halloween, it started to intensify and by Thanksgiving it seemed to be oscillating out of control, along with all manner of reason, civil discourse and personal responsibility.

We have had one case of coronavirus in my middle school and we have been shut out of the building since before Thanksgiving and will be until at least the New Year. Supposed experts constantly contradict each other and themselves; some of the best-known have even said the safest place for kids to be is in school. Yet, we are home. Attempting the usual while aided by electricity and technology. But every story I know in which technology substitutes the real thing ends badly. But I cannot stop it. I am powerless in the face of all this. . . .

I have to believe that the thing that is much bigger than me and all of us is more powerful than all the forces conspiring to make me feel so powerless. Storms come and go. The day after Isaias was sunny. It almost always is.