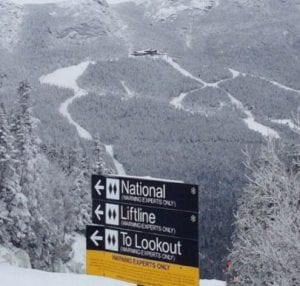 Though some would say “that’s nothing”, it was something to me. Accomplishing my first double black diamond ski trail was definitely something to me. More than something. Though I admit that as soon as I reached the top of the slope, and I knew there was no going back, a wave of reality washed over me. I couldn’t do this. What was I thinking?! But before I allowed my fear to overcome me, I noticed a little boy beside me all puffy and cute in his way too big snow pants and matching coat. His uncovered, probably freezing, chubby cheeks represented the color of bright pink roses.  He couldn’t be more than seven years, eight at the most. As I was staring at him, thinking there better be an ambulance nearby, he started, not so smoothly, slicing through the snow making a whooshing sound as he headed downhill. Not even thinking twice. And I know this sounds crazy, but I envied him like a child to their role model. Considering his amount of confidence and pride, not to mention the huge grin painted onto his face, he had probably gone down that trail a million times. But it didn’t matter, I still envied him. But I couldn’t help thinking, how could a little boy like him be so brave, and a big girl like me be so far from it?

Because of that little boy, I accomplished a big goal in my life without fear or regret. He brought me a sense of Triumph, Perseverance, and Risk Taking.

It’s definitely weird thinking back on that day and to think that a little Boy taught me that I could feel so proud of myself. If only you just take the risk lying right in front of you and persevere, the results can be so rewarding. And for all of those people that say “that’s nothing compared to what I can do”… screw you! Haters back off!