I stared out the car window at the familiar scenery of Route 58, my breath fogging up the glass and a pink indent growing on my forehead from the side of the car. We made this trek to Redding at least once a week in the Autumn and the Spring, mostly for sports, yet today it felt I needed to treasure it. Store it in a jar, and put it on the top shelf, among the other memories in my brain like this. Meaningful to me, but to anyone else, silly or meaningless. So many times I dreaded the car ride, but now all I could think about was that this was the last time I would be going to middle school field hockey.

I was nostalgic, it was like that feeling you would get visiting your old house. Reminiscent, but not necessarily too sad. I remembered this time around two years ago. Me and my sister sitting in this car. My knuckles white from gripping onto my shiny, new field hockey stick and my eyebrows creased. I remember how my younger sister, with her tear streaked face, ensured my mom was staying for our whole practice. I remember how two butterfly battalions were at war in my stomach. I remember how I was quiet on the outside, but inside, my brain was rushing through every single (mostly bad) scenario. I didn’t know anyone. I didn’t know how to play. I didn’t know the coaches. I didn’t know if I would like this. I didn’t know anything about this. It felt like I was filling up, like an overstretched water balloon. And I was really scared it would pop. I don’t like uncertainty, and that moment was very uncertain. My thoughts turned into my biggest Achilles Heel. In the grand scheme of life, that moment was not a big deal. But for me, in my decade-ish of life at that time, it was. Most of my friends played soccer, and I did too. Until then. And it can be so hard to go against the crowd, to be different and independent. It can be so hard to bring yourself to do something new, to go out of your comfort zone. But, by starting field hockey, I was doing that in my own little way.  And it was terrifying.

Now, we drove into the cobblestone entry of the driveway to Joel Barlow High School. I took a deep breath, the air sinking all the way to the tips of my toes, but I still couldn’t muffle my pounding heart. No matter how many games I played I was always nervous.

“You ready?’ my mom asked, she was my number one fan, rain or shine I could count on her cheering as loud as she can, which fills me with a joy that can’t be replicated. My mom was also the one who encouraged me to pursue this new, scary sport in the first place.

“I guess I’m as ready as I’ll ever be, and if you mean equipment wise, I triple checked, I remembered everything…this time.” We both laughed as we remembered the frantic car rides I had caused (which weren’t so funny at the time). We talked more, and in a blink, we reached the parking lot, early, at my insistence.  I didn’t see anyone from my team, but we walked into the stadium, the first ones to arrive.

The sun flashed in my face as we stepped onto the field, like a camera flash, my backpack was slung around my shoulder and my stick gripped in my hand loosely.

“Stop, I want a picture!” my mom beamed.

“You’re so embarrassing,” I joked as I stood awkwardly, posing for the picture, but it made me happy that she was proud.

“Thanks, love you!” I replied, then we headed to our spots on the bleachers and field. 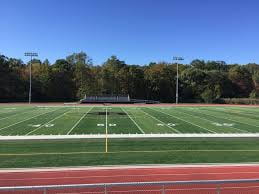 I watched as my dirty, white Saucony sneakers sank into the green turf and then lifted up again, and again, and again. The mild sun rays tickled my spine, but it was the perfect temperature, a cool breeze still made my nose and ears pink. I loved the crisp November air that you could feel burning down your lungs. I watched as the bleachers on both sides of the field started to fill, the clanging sound of people’s footsteps echoing through the air along with angry bird screeches. Still, the mini-stadium was currently relatively empty, and an eerie silence seemed to temporarily quiet the area, the calm before the storm.

Peacefulness. In a relatively unpeaceful place, yet in that moment, I felt at peace. I released some of my worries, which were so plentiful during this pandemic of immense uncertainty and fears, to that bright blue sky. This was one of those moments I wished I could stay in forever, but time moves on. Fortunately and unfortunately.

My teammates slowly trickled onto the field, as well as my coaches, who arrived shortly thereafter. I watched as The Other Team paraded across the field as well. Before I knew it I was jogging to my position, and waiting, and watching, for tantalizing moments that lasted forever, as the referee checked the goalies and then drew the whistle to her mouth, ever so slowly, like she was moving through mud, then, FWEET! The game began. I thought about it, yeah…this was my last chance to prove that the culmination of three years had paid off, and doing the scary thing wasn’t all a mistake.

Everyone rushed around, frantically trying to do their own jobs, shouting to each other. The parents cheered, the bleachers shook. The coaches yelled and paced. The small, white ball ricocheted off of sticks, and the familiar smack sounds of sticks making contact could be heard. Five hundred million sounds filled the air as the game rushed on, organized chaos.

But for me, it was quiet.

It was always quiet when I was playing, it was a magical sort-of-thing. The only things I ever heard were what I needed to hear in that moment. My coaches for advice and direction, my family for their cheers of encouragement, my teammates shouting to choreograph the dance that was this game. I don’t think it can truly be explained, there is something so freeing about the purpose and happiness of playing with your team. Especially during COVID, when it was so, so easy to fall down the deep, dark hole of all things negative. Thoughts could overwhelm me, bury me.

But not now, because this was an escape. For the 5,400 seconds that this lasted, it was pretty much all I thought about. For a change.

The game continued, and I messed up a few times. But every time I did, I did my 100% best to ensure we had the ball back. I would not be the reason that we lost. They were playing rough, and we were doing our best not to. But what if we lost, and they won playing dirty? At one point I grabbed a stray ball and ran, tap, tap, tap, tap, down the field. I was running and trying to get down as fast as possible and I wasn’t looking behind me and I felt a girl come on and she was one of the obnoxiously aggressive ones and I felt her push me and I didn’t know what happened but kept charging and she was on the ground behind me and the play stopped.

“Are you okay?” I asked. Did I hurt her? She just ignored me and went to her friends. I got the ball and her coach pulled her off the field.  Wait, wasn’t I the one who fouled her? I was so confused. My coach pulled me over.

“Did I do something wrong? Was that me or her?” I asked in one breath, I was gasping a little bit from running up and down the field.

“No, she tried to shove you and fell, maybe on purpose. It was her foul.”

“Oh!” I sighed, “Glad it wasn’t my fault.” I dragged my hand across my forehead, stretching out the skin. It was so frustrating, we were only one nerve-wracking point ahead of this team we needed to beat, and I hoped that lead would last.

It did. Plus one more point. The game was pretty close to perfect. My heart swelled with happiness at the end, as I cheered and laughed with my teammates. It was then that I realized that it paid off. My risk, venturing out of the safety net of my soccer-crowd friends was worth it.  It was worth it for the joy I felt playing. And the original, small, terrifying risk created this happy moment. This was also just one tiny time, but I would remember this when the big time came.

Eventually, I walked out to a perfect predusk sky, promising a great night to a great day. Me and my mom got in the car and started to drive away. Normally there were five hundred things I wanted to change with how I played, but for this moment, I was satisfied.

“Are you glad I convinced you to try field hockey?”

I thought back to all the hard moments, “Yeah, I really am.”