Did you know that missiles and jets are faster than sound?  Technology for war should be slowed down.  Arrangements should be made to slow down all countries from developing dangerous military technology.  The United States and its allies should work hard to create friendly relations and treaties with rival countries to prevent the excessive need for creating deadly bombs.  If we get into another deadly major war, the whole human race would be at risk.

Today jets double and triple the speed of sound.  These jets are too fast to shoot down.  According to The Aviation Geek Club, the retired reconnaissance plane Lockheed SR-71 Blackbird could travel at 2,193 mph.  The jet was so effective it was not shot down nor damaged in any hostile actions.  Despite the fact this plane did not carry weapons, in the future, a plane like this, likely would.

One day the human race could get exterminated due to powerful bombs.  ER Services reported that there were 75 million deaths in World War II, many were attributed to bombs and military weapons.  Envision the next major war, where nuclear missiles could kill hundreds of thousands of people.  There even would likely be satellites that have nuclear capabilities.  Albert Einstein, a scientist who helped create the nuclear bomb, stated “I know not with what weapons WW III will be fought, but WW IV will be fought with stick and stones.”  He is saying that technology will be erased due to the destruction of powerful weapons of today’s times.

Missiles have caused stress and fear throughout the world.  Missiles have had us near war many times.  An example is the Cuban Missile Crisis.  This transpired because Russia created an advantage by placing missiles in Cuba within range of the American mainland.  In fact, a nuclear torpedo was almost fired at the U.S. by a Russian submarine.

Not only can the Lockheed SR-71 go fast,  so can a Russian missile.  Military.com states that Russia created the 3M22 Zircon that goes at hypersonic speeds.  This rocket can’t be stopped by a traditional anti-missile system.  The U.S. Aegis missile interceptor is not quick enough to catch up.  There are two options to stop the missile, destroying it at launch or flying an object in its path.  Which is not so trustworthy or reliable to me and likely you too. 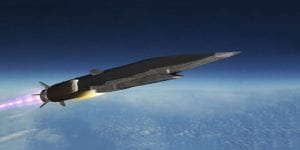 I understand why you may believe that military technology is very important.  Yes, it leads to jobs and more, but is it worth the risk of destruction?  The U.S. and its allies should work hard to create treaties and friendly relations with rival countries and enemies, to prevent the use and creation of deadly military weapons.