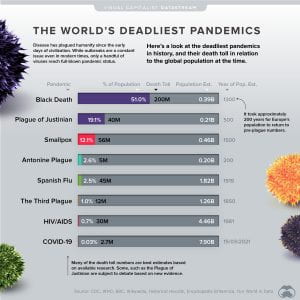 The bubonic plague killed one-third of Europe’s 75 million people in the mid-fourteenth century. Yet, revolutionary technologies starting with the printing press soon emerged from the continent, propelling humanity forward for centuries.

And the time is now.

Nationwide, society’s most vulnerable are getting vaccinated; deaths – the number by which pandemics are historically measured – have steadily dropped since early January; and schools – densely populated buildings – are functioning without fomenting the virus.

Yes, “cases” – reflecting positive tests, not sickness – have increased of late in certain places, including Connecticut. But, two weeks ago, the number of daily positive COVID tests in Connecticut had plummeted 80 percent since Jan. 8 (see screenshot below). Simultaneously, nationwide, hospitalizations for those 65 and older had dropped from 70 per 100,000 people to 12 per 100,000 people. 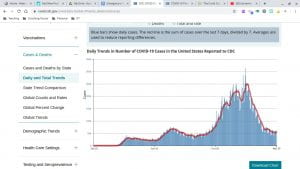 For the past year, senior citizens have largely been isolated and imprisoned in their homes; adults have unfairly lost businesses, missed vital cancer screenings and sunk deeper into depression; and, healthy children have been mercilessly forced home, missing school, friends, fresh air and much-needed exercise (nearly 80 percent of all people hospitalized due to COVID were overweight or obese).

Worldwide, 130 million people could starve from “lockdown-induced disruptions of supply chains,” says Oxford University scientist Senetra Gupta, a leader of the Great Barrington Declaration, a broad coalition of scientists which supports common-sense mitigation measures, allowing the young and healthy to live normally while protecting the most vulnerable. The UN has said 66 million children may become impoverished due to lockdowns; UNICEF predicts 1.2 million child deaths resulting from fewer hospital visits.

In the U.S., the Well Being Trust, a national health-centered foundation based in Oakland, has estimated 75,000 “deaths of despair” (like suicides and drug abuse), while those considering suicide between 18 to 25 has more than doubled, from 10 to 26 percent, the CDC says.

Worse, lockdowns are ineffective. States with strict measures such as California have about the same number of COVID deaths per million (134) as states with few restrictions, such as Florida (146). Libertarian and podcast host Tom Woods describes some of the unintended consequences of lockdowns in this video (which, like other videos which question the efficacy of lockdowns and mask-wearing, was removed from YouTube):

We must reclaim – and use responsibly – our freedom to move, work, socialize, learn and breathe unfiltered air. And Lamont assists in reclaiming these freedoms by not extending the public-health emergency set to expire on April 20, an executive order he established last year and has already extended twice. In a March 18 news briefing, the governor hinted that he would extend the order.

From March 15 to April 15, 196 people in Connecticut died from or with COVID, about 6.5 people per day. (Suicides and overdoses cause about 4 deaths a day.) Thus, the virus is presently responsible for killing 0.0002 percent of the population on a daily basis. How is that a public-health emergency?

Lamont’s office did not return a request to answer that question.

Yes, COVID remains. And, yes, we must remain careful. But the objective in any emergency is to end it. Immediately.

A homeowner facing the same emergency – a fire, say – a day later loses his home. If Lamont extends his executive order a third time, he will signal his failure in handling an emergency, and prevent us from moving on as we must.