Fracking is a way to get oil that has been used since the 1940s but it has become a very debated environmental problem. Some people claim that fracking is a safe, efficient way to harvest oil and others claim fracking can destroy drinking water, pollute the air, cause earthquakes, and sinkholes. I agree with the second group, fracking has been proven to do all of the things listed above and this is why I believe it should be banned. Millions of people are negatively affected by fracking. Fracking is estimated to cause 29 billion dollars worth of health damages per year in the United States this is straight out outrageous. This number is the total amount of money US citizens would have to pay in medical bills. Fracking Is unfair to US citizens because it will force them to pay bills that they should not have to pay and also make their water undrinkable. This is yet another reason that fracking should be banned. Scientists say pollution caused by fracking will cut millions of lives short due to respiratory issues, birth issues, and immune issues. Fracking also has caused oil to leak into the groundwater and wells causing some people’s water to be so rich with oil they can light it on fire. Fracking also can cause millions of gallons of water to become dangerous to drink. France and Ireland have already banned fracking and I think the US should as well. Fracking does have some pros like the money it can generate and the amount of workforce it has, which helps with unemployment rates but I think the cons outweigh the pros. The first step the Senate needs to create a bill that will ban fracking in all US states. The second step is for the senate and the committee to make the bill perfect and then vote to approve the bill or not. If they vote yes the bill will go to President Biden and he will then have to approve the bill. Then they create the law and start to enforce it. If fracking becomes banned in the US it will save US citizens lots of money and even save their lives. 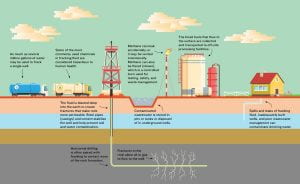 1 thought on “Fracking Should be Banned in the US”