“The Winner of the 2020 Heisman Award is Devonta Smith”. How many people are going to buy his jersey after this? The school is going to make a lot of money from this, how many scholarships do they give out a year. According to Collegefactual.com it states that Alabama has up to 85 scholarships on their football team, and in total men and women athletes at Alabama there are 640 athletes. And on top of that The University of Alabama awards 56% of incoming freshmen a scholarship. So why do they need to get paid?

Some may say that the athletes spend all of their time and dedication on sports that they should receive compensation but I say no! The Average scholarship per year at a Division 1 school is $18,000 which is a lot better then getting paid like any other student. According to  Collegeaffordability.org the average full time college student makes $3,900 dollars a year. So which ones sounds better? But there is a factor of walk on students where they are on the sports team but they just don’t have the scholarship.This is why the NCAA needs to hand out more money to schools for scholarships because as of now they only hand out 10 million dollars of there 19.9 billion dollars per year,according to the  Offical NCAA website. You might think how much do the schools pay, about 3.5 billion per year to answer that question.The NCAA should at least give ¼  of their yearly income to help. With this Walk-on 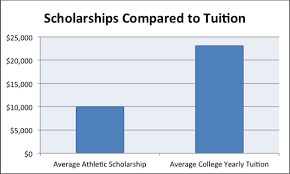 players won’t have the fear of student debt, which also has become a major problem to our nation’s students today.After all the NCAA will still make a tremendous amount of money.After handing out a ¼ of there money the  NCAA would have around 15 billion dollars each year. And even if student athletes got paid would that take away the competition of trying to get into the NFL? Most likely according to bestcolleges.com they state that all players have the dream of getting to the pros, and all fans enjoy the level of competition to get there. All in all student athletes are still technically getting paid but in scholarship money. Some may say that it is not the same thing of getting paid but it might just be better. A scholarship that pays $18,000 dollars a year or the average amount of money a college student makes per year which is $3,900, so which one sounds better?

2 thoughts on “NCAA Needs To Hand Out More Scholarship Money ”