Eighty-eight percent. In 2018, that was the amount of police stops involving just Black citizens; out of that percentage, 70% of them ended up being completely innocent, yet were still pulled over and in some cases abused by the police. Furthermore, police brutality is the leading cause of death for African American men in the United States, said an article NetImpact.com. Whether we’d like to admit this unfortunate reality to ourselves or not, black citizens are being discriminated against on a day-to-day basis. Especially for something that is fully out of their control. 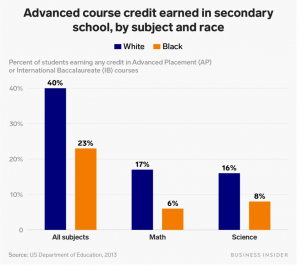 To this day racism still has a shockingly large presence in our country and isn’t going anywhere if something doesn’t change. According to a recent study done by the Pew Research Center, in school systems 55% of all African American college students reported race-related struggles while in school. The almost daily occurrence of racial discrimination against black people should not be something parents tip-toe around and avoid talking to their children about.

Altering mindsets about races other than our own begins at home from a young age. The way that parents influence their children, has a substantial impact on how the future generation will grow up to view other people. Parents need to teach their children that we are all human regardless of race. But, for most parents, teaching their kids about such a serious topic, while still young, can be a little unnerving. However, there are ways for kids to learn, so it organically forms the way children’s opinions. Just like you would teach them to not play near the stove and to say please and thank you. You can also teach them about the sad reality of racism and what they can do to help.

UNICEF says, there are different ways to talk to your kids depending on their age. For example, for children under 5 years old you can begin to recognize and celebrate other people’s differences. At such a young age, parents have the opportunity to create the world view for their kids.

For children between the ages 6-11 they tend to want more answers and are eager to learn. So with them, be curious and let them discuss all their feelings in an open conversation.

And finally, for kids who are 12 years old and older. Just continue to have the conversation with them and encourage action. Racism isn’t just going to magically go away, even if every parent properly educates their kids. They need to take action and stand up for what is right. And together we can make society a better and more inclusive place for absolutely everyone.

8 thoughts on “Parent Should Be Teaching Their Children About Racism”