Every morning students across America wake up at the crack of dawn, half asleep, to get ready for school. During school, the students are sluggish, tired, and in need of more sleep. Experiments have been conducted with schools finding out whether or not the start time of schools really affect students’ mental health and performance “Not getting enough sleep is common among high schoolers and is associated with several health risks including being overweight, drinking alcohol, smoking tobacco, and using drugs; as well as poor academic performance.” According to the CDC. Healthline states that 73% of high school students do not get enough sleep. Some are awake in the middle of the night because of anxiety, doing homework, stressing about school, or poor sleep habits. But there is a solution.  Changing the start times of school.

According to the URMC, (University of Rochester Medical Center), teenagers who start school before 8:30am are at a higher risk of experiencing anxiety and or depression. The URMC decided to split their experiment into two groups. One group started school before 8:30, another group started after 8:30. (8:30am is the recommended time of start time for high school students according to the American Academy of Pediatricians.) The group who started after 8:30 reported feeling good, with fewer depressive and anxiety symptoms. On the other hand, the group that started before 8:30 reported feeling tired, with higher depressive and anxiety symptoms. Another study, led by Finley Edwards in Wake County, North Carolina concluded, “I find that delaying school start times by one hour, from roughly 7:30 to 8:30, increases standardized test scores by at least 2 percentile points in math and 1 percentile point in reading. The effect is largest for students with below-average test scores, suggesting that later start times would narrow gaps in student achievement.”

Schools are constantly pushing students for the best test scores, encouraging them to do the best they can on the standardized tests. It makes me wonder what school boards are thinking when kids are staying up until possibly 1:30 in the morning then forced to wake up around 6:30 to get to school and then take a test that defines their placements in classes. There would be only positive outcomes if school start times were to change. Children would get enough sleep and there would be a lot less pressure in the mornings.School boards across America need to reconsider the start times of schools because of the negative effects it’s having on the student’s mental health and test scores. 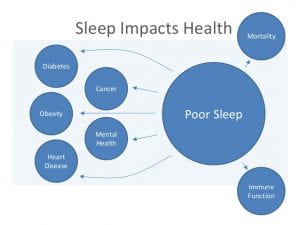