“The well being of mankind, its peace and security, are unattainable unless and until its unity is firmly established” (a quote by Baháʼu’lláh, a religious leader). A main cause for disunity, and even violence, in a society is a mindset that we are a population divided into ideologies that are often manufactured. How and why people take extreme positions could be from the influence of foreign governments, advertisers, and political parties, particularly using social media as a conduit.

“Black and White” thinking is the tendency to think in extremes. For example, after the protests that erupted into violence in Charlottesville in 2017, in the same famous speech when President Trump used the phrase “very fine people,” he also spoke these words: “It looked like they had some rough, bad people, neo nazis, white nationalists…” Some media sources misled the public to believe that the President had called racists “very fine people.” Misinformation such as this inflames people’s emotions and clouds their judgement. 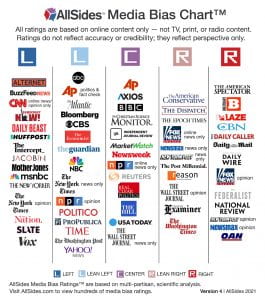 Often there are more than two sides to an issue, but social media, and even YouTube algorithms (Zeynep Tufekci, “YouTube, the Great Radicalizer”, March 10, 2018) lead users into increasingly extreme thinking, and prevent them from measured reasoning. Overgeneralization plays a big role in black and white thinking by making broad interpretations from just one piece of evidence instead of the puzzle as a whole, thus missing the bigger picture. Most issues, in reality, are too complex to fit into two neat sides. This is one major cause of disunity. Maybe by considering parts from both views the best solution can be found.

Foreign governments such as Russia and China influence the US population primarily through social media. “Russia and China believe themselves to be engaged in an information war with the West and have begun to invest significant resources in such tools.” (The RAND corporation, Hostile Social Manipulation by Russia and China a Growing but Poorly Understood Threat, September 4, 2019). The New York Times also wrote an article stating that foreign governments are actively infiltrating our social media with the purpose of dividing the US. “A mix of domestic and foreign groups, operating autonomously or with loose ties to a government, are building from the methods used by Russia in the last presidential election, making it difficult for the platforms to police.” (Davey Alba and Adam Satariano, At Least 70 Countries Have Had Disinformation Campaigns, September 26, 2019)

It is important to consider the facts of an issue and examine sources of information to form an independent opinion. Knowing the forces of influence can help us be aware when we are being persuaded into extreme thinking. We will be safeguarded by being independent investigators of truth.