Did you know the amount a woman gets paid is less than a male who has the same job? You may think that sexism is a thing of the past, but it is still going on today. For every dollar a man makes, the average amount a woman makes is only $0.98. A two cent difference may not seem like a lot to you, but throughout a 40 year career, that would amount to $80,000 of lost earnings.

Forty two states in America have laws requiring equal pay. Even with those laws, the pay gap in an uncontrolled workplace is only $0.81 for every $1.00 a man makes. Some jobs that have the largest pay gap are pilots, chefs, computer programmers, and professors. According to usatoday.com, female paramedics make only 65.5% of what male paramedics make. That is too much for anyone to have to go through.  Especially with a job as important as a paramedic.

It is ridiculous that people think that women deserve less money strictly because of the fact that they are female. Pay should be based on skill, not gender. Although the pay gap has lessened, it is still an issue. A big one.

When you add more issues on top of the pay gap, it widens. Like race. Black and Hispanic women get paid less than White and Asian women. Another issue is children. According to the Economic Policy Institute, “Parenthood has opposite effects on mothers’ and fathers’ labor force participation.” Male workers with children are usually paid higher than normal, while female workers with children tend to be paid less. While this makes no sense, it is still a thing that many citizens face. 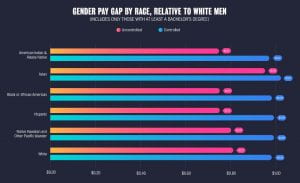 Even with the same amount of education, ranging from less than high school to advanced degrees, women are almost always paid less. “Among workers who have not finished high school,” said the EPI, “Women are paid 78.2 percent of what men are paid.” Choices in education are also gendered. Males are more likely to major in engineering and engineering technology, while females are more likely to major in education. 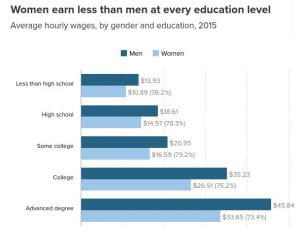 The gender pay gap needs to disappear. I propose that states like Alabama and Mississippi, states that don’t have equal pay laws, establish definite equal pay laws that eliminate the gender pay gap. States that do have equal pay laws, like Arizona and California, should strongly enforce their laws. Even with these laws, in 2019, the percent that a woman made of a male’s salary was 89%. In order to close the gap for good, people have to actually follow these laws. Once this happens, the world will be one step closer to equality.