The combined revenue of all NCAA college sports in the United States is $18.9 billion every year according to NCAA.org. To give you any idea of how much that actually is, it is enough to give every human on the planet more than $2. But not a single dollar of that is legally allowed to go to the people who worked for that money and those are the college athletes.

I realize that this is not an easy problem to solve because there is a lot of variability within the schools that participate in NCAA Division One sports. Texas A&M, for example, makes $192.6 million every year just from its football team alone which is an extreme for one sport. There are other schools and other sports that do not bring in nearly that amount, but that should not stand in the way of exploring a way to pay athletes. 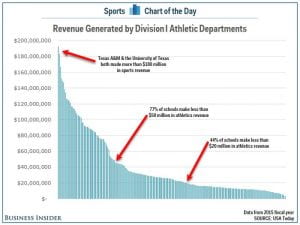 Most of these athletes will never even get the opportunity to get paid unless they make it to a pro league. The odds of that are less than 1 in 100 college athletes according to the NCAA. While they know the risk of this going in, there is something that doesn’t feel right to me about overlooking the opportunity to reward someone who has worked hard personally and for the school knowing that it may not be their career. Additionally, according to NCAA only about 1% of college athletes have a full ride scholarship so that leaves the other 99% to struggle with paying for college.

If we paid college athletes they wouldn’t have to start from scratch, or be in debt, when they get into the real world. Many college level athletes spend time training so they might not be able to hold down a job while also focusing on their studies. Being a student is a full time job for most and adding a competitive training schedule on top of that leaves little time to earn additional money if they need to. It can put the athlete in a difficult position that really is not necessary given what is actually available.

College athletes are employees earning a wage for the work that they do and the commitment that they make to their school. To be clear, this does not mean making professional level salaries, but something reasonable and sharing in the profit that the schools are making due to their talents.They should be rewarded in the here and now for their contributions while they are giving it all to their school on and off the field.