While the world begins to be injected with a new vaccine created in less than a year, many don’t want it mandated. While I am for vaccinations I can clearly see why many people don’t want to take it.  First off, the new Covid -19 vaccine uses mRNA technology that many second guess because “There are potential risks from mRNA vaccines that include local and systemic inflammatory responses, which could lead to autoimmune conditions, and the toxic effects of any synthetic nucleosides or vaccine delivery components.” (Pharmaceutical-Technology). This is a big concern for many, yet only a small factor to why many question this particular vaccine.

One big excuse not to be vaccinated is the religious exemption, Connecticut has one but it’s  presently at risk of being repealed. Our legislators are the only ones who can help prevent this  infringement on our rights. And we the people should not allow this law to be trashed, it would make life much harder for any one second guessing this vaccine.

In a more broad stance 31% of Americans don’t plan on getting the vaccine, which is about 101,680,000 Americans (Pewresearch.org, 3/5/21). This huge number makes this topic ever so controversial.  While many would argue that the vaccine is the best option, I can attest that a Covid therapeutic is also an option and can only improve as time goes on, people should be able to opt for that instead at the very least.

What else may be drawing many concerns about the Covid vaccine?  Maybe it’s because of the reports of alarming side effects caused by the Covid vaccine, from mysterious rashes, to deaths. Infact the FDA has reported several to the Vaccine Adverse Event Reporting System. “During this time, VAERS received 1,913 reports of death (0.0018%) among people who received a COVID-19 vaccine.” (CDC)  Many say one death is too many, let alone nearly two thousand, not to mention not all have been vaccinated yet. We still have a long way to go. We know the short term effects, but what are the long term ones?  Another big issue is that if something goes wrong you can not sue vaccine companies, due to the PREP Act. The Government does have a program but. “.. It has only covered just 29 claims over the last decade.” (CNBC 12/17/20).  As you probably can see people who are hesitant to be vaccinated, are probably not reassured by any of this.

To Conclude, many Americans are understandably undecided about this new vaccine, and a potential mandate could unfairly force millions of people to do something that could go against their religion, personal beliefs, rights and much more. 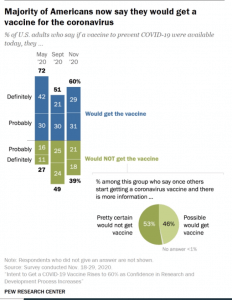 1 thought on “Why the Covid-19 Vaccine Should Not Be Mandatory!”