ArmyTimes says that, “ U.S. military’s combat casualties in Afghanistan were the highest in five years, and Army service members bore the brunt of those losses.” This means that the soldiers are at the highest risk of dying in years if they get deployed in Afghanistan.

180,000 people join the military each year. According to The Society Of Federal Health Professionals or otherwise known as AMSUS,  “Of the 1,884,653 male soldiers who separated from service during the study period, 3,819 died within 18 months of separation.“ Two hundred two of those people were soldiers 17-19 years old with 1105, 20-24 years old. This is all before their brains are fully developed. Out of the two hundred two 17 to19 year olds who died, 77 were from suicide. Further more, out of the 1105, 20 to24 year olds that died 295 of them died from suicide. This shows that people of that age are not ready to be put in the military. 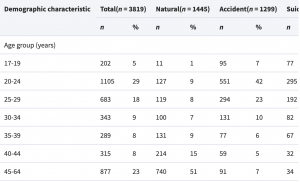 AMSUS also states that “among these soldiers, 3,819 (0.2%) died within 18 months of separating from service. The majority of those who died were less than 30 years of age (52%).” This is a big deal because out of all the people who died, the majority were younger than 30. This goes to show how vulnerable people in this age bracket are.

This is why the US military must raise the age to join the military. If we don’t do anything now, this problem of people losing their lives at a young age is just going to continue and get worse.

1 thought on “The US Military Must Raise The Age To Join The Military.”