Imagine: you finish eating one day, go to wash your hands, and turn on the faucet. You scream. A fireball is bursting out. This became reality for Jason and Debby Kline of Cleveland, who awoke one day to fizzing water and the next to fire shooting up to the ceiling. The smallest ember could have set their house aflame. Their well was filled with inflammable methane gas, polluting a vital resource and making it a deadly threat. And the Klines are not alone. Across the country, methane pollution puts thousands of children and families at risk. And the #1 cause is hydraulic fracturing. 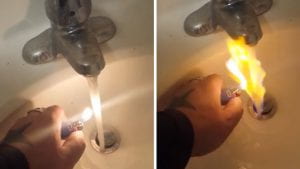 Hydraulic fracturing, or fracking, is a drilling technique where rock formations are cracked to release natural gas using water and sand. Fracking leads to pollution, earthquakes, environmental damage, and hurts people and communities. Research by the NRDC, an environmental advocacy group, shows the astonishing cost of this controversial operation. 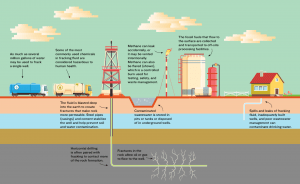 Fracking uses up to 9.7 million gallons of water for one well – a tremendous waste of a valuable resource. An EPA report revealed that 151 major spills or leaks of fracking fluid, a toxic mixture of water and chemicals, occurred between 2006 and 2012 in 11 states, some of which ended up in sources of drinking water. Contamination is common and difficult to prevent, occurring through faulty well construction, fractured rock formations, and leaking of wastewater and fracking fluid. Wastewater, a byproduct of fracking, is deposited back into the ground, leaking into water sources and causing earthquakes. The United States Geographical Survey reported an average of 25 earthquakes of magnitude 3 or higher in 2008, but over 1,000 in 2015, with larger increases in states with fracking like Oklahoma and Ohio.

Fracking’s impacts are not limited to the water and ground. In Northeastern Utah, researchers estimated that the amount of smog-forming compounds released through oil and gas operations including fracking was equivalent to the emissions of 100 million cars. These pollutants, including methane and other toxic byproducts, cause illnesses as severe as lung disease and cancer for anyone nearby.

Proponents claim that fracking is a cheap source of energy and creates jobs, but the facts are clear: it just isn’t worth it. When it comes to fracking, the costs outweigh the benefits. Furthermore, renewable energy sources provide the same advantages with few drawbacks.

Government agencies, nonprofit advocacy organizations, and independent researchers alike have come to one conclusion: if we allow these operations to continue, it will lead to widespread ecological damage and harm our communities by polluting the water we drink and the air we breathe. President Biden and the U.S. government must immediately outlaw hydraulic fracturing operations anywhere near residential areas or nature preserves.