Assumptions can cause real problems in this world. That is why we need to think before we act.. There have been times where I’m talking to somebody and they misinterpret what I said and take it as an attack or an insult. This also happens outside of conversations. There are times where organizations have questionable names and/or slogans. If the organization is popular and has a name for themselves they would most likely be smart enough not to put something offensive out there. And there are times when it’s not meant to be offensive but people assume it is. An effective representation of this is the “Washington Redskins”. The Washington Redskins are a respectful franchise in the NFL based in the Washington metropolitan area. Their name has been talked about by the media for a long time. 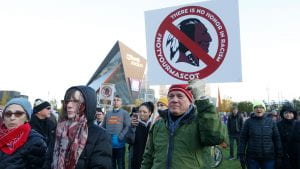 The Washington Redskins date back to 1932, when the team was founded. According to Daniel Snyder – an American Executive of the NFL – when the name was initially created, it was chosen to honor Native Americans and the coach and four players at that time who were Native American.  If fans and people associated with the organization encouraged the real meaning behind the name then no name changing was needed. Not only that but people need to realize that not everything is intending on being offensive. It’s times like this when people aren’t using their common sense. When a lot of other people are encouraging the real meaning behind the name then the people who think negatively of the name can be convinced otherwise.

The fans and the organization behind the franchise should be encouraging the fact that the Washington Redskins name is a sign of respect not imitation.