Growing up in a competitive community full of football fans, I can tell you that after years of watching, football becomes something inspiring. Football may seem like a ruthless sport at first glance, but the more you experience, it becomes a form of flowing poetry. Coaches create complex plays and players execute perfect routes. But recently there has been a major controversy involving team names.

When I heard that the Redskins changed their name, I was confused. Why? After days of research, I realized that the term Redskin is considered an offensive slur, and I knew why the name had to change. But I dove deeper into the matter, wanting to know why the team was originally named the Redskins.

When the team was founded, the roster contained four Native Americans. The naming was in honor of them. I figured that this occurred just like any other thing that we decided to cancel from the past. The word had a different meaning compared to today, and less people had a voice back then.

But the main reason behind these changes and over one-hundred more is because  Native Americans feel that other ethnicities are not entitled to have names that stereotype them. This statement is correct. Imagine a team from somewhere else that stereotypes you. But team names have a greater meaning. Team names let someone know who they are, and it gives them history.

If we continue to make bad team names that are appealing, the fan base will shrink. The effect of team names has a huge toll.

Richard Powers, a sports marketing expert at the Rotman School of Management at the University of Toronto, states, “Usually what you’re looking for in a name and logo is something that gives the fan, the target market, a clear connection to the team. So it can’t be anything too contentious. It can’t be anything too abstract. There has to be a direct connection,” Obviously when it comes to names, everyone would love something attractive like “The Raptors” or “The Kraken”, but as a sports community we have lost touch when it comes to team naming. 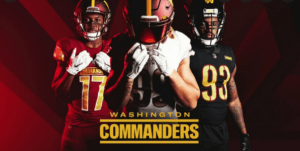 When fans found out about the name change in Washington, anger and sadness quickly spread. For a team that has consistently under performed, both on and off the field, you could easily understand the added stress that a name change can bring.

The NFL, MLB and other sports organizations need to open their eyes. Team names have a massive role to play, and I urge the creators to take careful consideration for fans, ethnicities, and players when naming teams.

The first thing you ever learn about a team is their name. Why not be as presentable as possible?