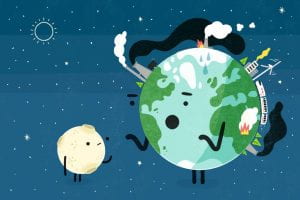 The world is dying and it’s our fault.

Climate change has been an issue since 1950 and it has been changing the world but not for the better. And at least ¾ of this pollution comes from human activity, says carbon brief. Climate shapes the world we live in everyday. But what is being done about it?

Not much unfortunately. Climate change isn’t taken seriously enough and this could have serious consequences.

Climate change is a serious problem that not many people are concerned about. According to Pew research only 59% of Americans believe that it’s a serious threat.

This isn’t nearly enough people, people should be concerned as it really is a major threat not just to society but to the world as a whole.

Nasa put out a statement telling what would happen if nothing is done about greenhouse gas production saying that the temperature has risen 5.4 degrees over 1990s levels and that the temperature will keep rising from anywhere between 3 to 10 degrees fahrenheit in the next century and keep increasing every century after that.

The strength of climate change from this point on all depends on the amount of heat-trapping GHG emitted internationally. If nothing is done about these gas levels they will stay the same or continue to rise, in turn the temperature will also keep rising according to Nasa. If the temperature keeps rising there will be serious issues affecting the climate globally such as droughts and heat waves happening more often, Nasa states.

Nasa says that “extreme heat days” that would happen about every 20 years will happen every 2-3 years across the globe. As the world starts to get hotter things will start to melt, Nasa presumes that all of the ice in the arctic will most likely melt completely causing the sea level to rise 8ft.

The only problem being 29% of GHG emissions come from cars making it the biggest contributor to GHG says the epa. And you can’t just tell people to get rid of their cars.The government needs to limit all GHG emissions, not just in developed countries and create more green power to limit the amount of chemicals that are released into the air.

The international government wants us to limit the amount of GHG we as an individual produce but there’s only so much one person can do. The only people who have the power and resources to change world policies is the government. We need them to put climate issues into the limelight and to take greater action against climate change.