When someone may think of celebrities, some common words that may come across their minds are spoiled, dramatic, etc. which may be true but for most celebrities they are just like us despite the exhausting issue that most of them have to continuously face with trying to hide from the public eye. Scary paparazzis will do whatever they have to do to try to illegally steal information and expose celebrities. This has become extremely toxic for celebrities negativeley impacting their mental health and so many other aspects of their lives. There are countless scary fan and/or paparazzis stories that could have led innocent celebrities to or very near to death. 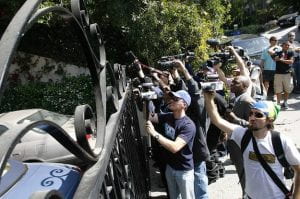 In celebrities eyes paparazzis are clingy villains who violate the 4th amendment which is “The right of the people to be secure in their persons, houses, papers, and effects, against unreasonable searches and seizures, shall not be violated, and no Warrants shall issue, but upon probable cause, supported by Oath or affirmation, and particularly describing the place to be searched, and the persons or things to be seized.”

According to Uconn Today ¨Living their day-to-day lives in the public eye, many celebrities must contend with the fabrications and distortions of gossip columnists, the infatuation of stalkers, and the unrelenting paparazzi, who follow them into restaurants, to their children’s schools, on vacations, and even into their own residential neighborhoods.¨We need to take measures in this matter and ensure that everyone in America can have their privacy respected and valued. A clear example of this is “For instance ever since the case of Actresses Halle Berry and Jennifer Garner in which they and their kids were harassed by paparazzi the actress both urged California to pass a law to ban paparazzi from harassing well known celebrities’ kids. (Clyde Hughes, Paparazzi Ban on ‘Harassing’ Kids of Celebrities, Politicos To Be Law) California immediately took notice of the law and banned it seeing that paparazzi are really a threat to others.” The fact that righteous people in America have to frequently experience such terrible things like that is just morally wrong. This is supposed to be a free country where you’re not constantly feeling that your private space and identity is being unlawfully invaded and exposed.

In order to hopefully solve this issue the congress needs to make stricter laws or change existing laws if someone invades someone’s private space or miss follows the 4th amendment. I feel to call upon this because this doesn’t just happen in L.A, this  is a huge issue all across America. I ultimately just feel that everyone in America should never feel like their privacy is being invaded.