Rene Itah 4/3/17 Period 5 ILA Hey, remember when I wrote a letter-essay about an album? And how it wasn’t even really a letter-essay, since it wasn’t a book, and I obviously shouldn’t do that again? Yeah, I’m doing it again. Sorry. This time, it’s about a Crystal Castles album, their third album. The first … END_OF_DOCUMENT_TOKEN_TO_BE_REPLACED

Dear Mr. Jockers I recently finished Harry Potter and the Sourcer’s Stone by: J.K Rowling. This book is 336 pages long and by far the best book I have read in a long time. The author, J.K. Rowling has written all seven Harry Potter books and has sold over 400 million copies in all. J.K. … END_OF_DOCUMENT_TOKEN_TO_BE_REPLACED

I have just finished a great book called The Raft, a 231 page thriller book by  Stephanie Stuve Bodeen. Stephanie grew up in Wisconsin on a dairy farm where, she spent her time milking cows, she even learned to drive a stick shift at the age eight. She has lived in eight states, two … END_OF_DOCUMENT_TOKEN_TO_BE_REPLACED

I have recently finished I Am Number Four by “Pittacus Lore” or Jobie Hughes and James Frey. James was born on September 12, 1969 in Cleveland, Ohio. Jobie was born on July 9, 1980 in Renton, Washington. The two created the alias to write the story. References can be seen throughout the book. This book … END_OF_DOCUMENT_TOKEN_TO_BE_REPLACED

I just finished the book Where The Sidewalk Ends, a 183 page poem book. Shel Silverstein wrote many other poem books, and I’ve read most of them, and liked them. So then I wanted to read this one. The poems in this book are very random, and that’s what makes them funny. Some of the … END_OF_DOCUMENT_TOKEN_TO_BE_REPLACED

Peoples of the HKMS,   I am almost finished with the Treasure Island by Robert Lewis Stevenson (Russian translation). It is a classic that everyone must read. Today, it is a pretty popular classical book (almost on par as the Three Musketeers). The Russian version of the book is 200 pages long, while the english … END_OF_DOCUMENT_TOKEN_TO_BE_REPLACED

Ethan Horbury 4/2/17 Mr. Jockers ILA Per 2   I have recently finished reading This is Where it Ends by Marieke Nijkamp an Author from the Netherlands. This book is told from four different points of view Tomás, Claire, Sylv (Sylvia), and Autumn. It is a very fast paced book that … END_OF_DOCUMENT_TOKEN_TO_BE_REPLACED

Dear classmates, 4/7/17   Recently I have finished reading the book Game Changers #1, written by Mike Lupica, who is actually the youngest columnist writer for a New York newspaper. I read this book because I have been reading a lot of sports books and got hooked on Mike Lupica’s books. This one stood out … END_OF_DOCUMENT_TOKEN_TO_BE_REPLACED

Dear Peers, I just finished re-reading one of my favorite books, Paper Towns, a realistic fiction novel written by John Green. The author of some of the most popular books, including, The Fault In Our Stars, and Looking For Alaska. With these two books he won an Printz award in 2006. Paper Towns is also … END_OF_DOCUMENT_TOKEN_TO_BE_REPLACED

Wednesday, April 5, 2017 “Out of My Mind” Letter Essay Dear Readers of the Blog, Recently, I completed “Out of my Mind,” a realistic fiction novel written by Sharon M. Draper. Draper is also the author of, “Tears of a Tiger,” “Battle of Jericho,” “Forged by Fire,” and many other young adult novels. This book … END_OF_DOCUMENT_TOKEN_TO_BE_REPLACED 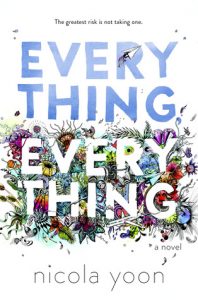 Recently, I finished reading Everything, Everything, a 352 page realistic fiction novel, by Nicola Yoon. Nicola Yoon is a hopeless romantic, as said by her herself, which inspires some ideas for her books. She also was a former jewelry maker before she found her passion for writing. She has won several awards including, the 2016 National Book Award in young people’s literature for her book The Sun is Also a Star. This award was given to her a year after, Everything, Everything was published. Everything, Everything will soon become a major motion picture this summer and over 8 months was already on the NYT’s best seller’s list. It also is in the American Library Association’s 2016 Best Fiction for Young Adult’s Section. I chose to read Everything, Everything because I was looking for new books to order and the cover of this book attracted me to reading about it, and I then remembered that I saw the trailer for the movie of this book a little earlier and really wanted to see it. The movie hasn’t come out yet, so I decided to buy the book and get an idea of what the concept of the book actually is, as the explanation was a little vague.

In the book Everything, Everything, Madeline, the main character has a sickness. You’re most likely thinking it’s a common sickness much like others, but she has a rare sickness, unlike several. Madeline is entrapped her in her airlocked home with no connection to the outside world, due to her highly compromised immune system. Crazy right? Her isolated life is intervened only by online classes, her nurse, Carla, and her physician mother. If she came into contact with the world outside she might just die. All until the day a family moves next door and she meets Olly. At first, it is a virtual relationship, signals through their windows and online, but eventually they finally meet in person, thanks to her nurse, Carla. Madeline begins to experience something new and huge shift in her life as she falls in love for the first time, but wonders how she can have a real relationship with her disease lingering in the middle of it. Olly and Madeline’s relationship progresses and soon enough her controlling mother finds out and fires Carla for sparking the teenager’s love, while endangering her daughter’s isolation. With Olly, Madeline conquers her fears and runs for freedom, flying to her dream place, Hawaii for a trip she believe will be her last. Madeline explains to her mother she’d rather spend a couple days in freedom, rather than spending the rest of her life dying in the confines of her home. She risks even more trust when she lies to Olly, telling him she is on experimental medication that allows her to travel. When in Hawaii, Madeline gets sick and she is flown home, but the doctor who treated her in Hawaii reveals something shocking that will impact Madeline and the people around her for the rest of her life.

I liked the way the author left Olly as a mystery in the beginning, and the aspect of him moving in next door possibly dangerous, which got the reader thinking, what could a family moving in do to Madeline? The author constantly made the reader guess what would happen next, which was also a very intriguing way of making the reader keep reading. I would say the theme of this book would definitely have to be bravery as Madeline followed her beliefs and overcame her fears for love. Madeline has lived in fear of the outside world her whole life and daring to even step onto the grass right out of her house would be a huge risk, but travelling to Hawaii is whole other section of boldness and doing it out of love is something some would never challenge to chance. She also defies her disease out of curiosity and self-courage. When Madeline gets the idea that she’s possibly not sick, she does something insane and leaves. She doesn’t consult her new nurse or her mom about if she’d be affected, she just believes she needs to find the truth out on her own. I was very surprised when the author ended on such a simple, yet misleading ending. I honestly was shocked she ended it on a dull note, she kept the reader interested throughout the whole book, but kind of gave up at the end it seemed like. The reader was at first looking at this happy ending, but then she left the reader on this cliff-hanger wondering what happens next in the future after an eventful situation happens. Lastly, I liked this piece of writing that pivots between Madeline’s thoughts and what she actually says, by Nicola Yoon,

Really there’s only one thing to wish for — a magical cure that will allow me to run free outside like a wild animal. But I never make that wish because it’s impossible. It’s like wishing that mermaids and dragons and unicorns were real. Instead I wish for something more likely than a cure. Something less likely to make us both sad.

I find this part in the novel to be a great example of how the author gives the reader a peek into how Madeline thinks, in contrast to what she actually says. The author shows that Madeline has this conflict in her head of what she wants to speak and do, but what she actually says. It gives insight to how the main character differs from her mind to her mouth in just a couple, simple sentences. I would rate this book a 9/10 as the whole book was so compelling, thorough, and fascinating, rather than the end where the author added in a quite disappointing ending.

P.S here is the movie trailer to this book,

I’m a little over halfway through a book written by Robyn Schneider, Extraordinary Means. Robyn Schneider is not only an author, but an actor and online personality. She studied creative writing and is a graduate of Columbia University. She is also a graduate of the University of Pennsylvania School of Medicine, where she studied medical … END_OF_DOCUMENT_TOKEN_TO_BE_REPLACED

Recently, I finished the book A Wrinkle in Time, a classic novel written by Madeleine L’Engle. She was born on November 29th, 1918 and lived in New York City until the age of 12. After she was married and had a baby girl, they all moved to Connecticut in a small dairy farm village. … END_OF_DOCUMENT_TOKEN_TO_BE_REPLACED

Recently, I finished reading Sixteenth Summer by Michelle Dalton. Sixteenth Summer is a 305 page, fiction book. Currently on amazon.com it has 3.9 stars out of 5.  I read this book because it was by the same author as the last book I read. Also I thought it was going be the sequel to … END_OF_DOCUMENT_TOKEN_TO_BE_REPLACED

Recently, I finished reading the novel Finding Audrey by Sophie Kinsella, a 286 page realistic fiction book. Sophie Kinsella is a #1 best selling author and she also wrote the Shopaholic book series that is also a very popular series. Finding Audrey  was published recently in 2015. I chose to read this book because my … END_OF_DOCUMENT_TOKEN_TO_BE_REPLACED

Recently, I finished reading Crazy, a 367 page realistic fiction novel by Amy Reid. Amy Reid is originally from Seattle, but is now living in Oakland, California. Reed is also the author of Beautiful, Clean, and Over You.  This novel was amazing. I’ve never read a book that has made me feel … END_OF_DOCUMENT_TOKEN_TO_BE_REPLACED