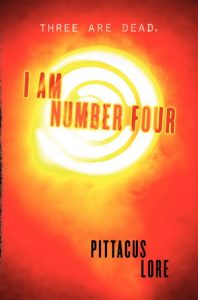 I have recently finished I Am Number Four by “Pittacus Lore” or Jobie Hughes and James Frey. James was born on September 12, 1969 in Cleveland, Ohio. Jobie was born on July 9, 1980 in Renton, Washington. The two created the alias to write the story. References can be seen throughout the book. This book contains 440 pages.

As I said in the previous letter essay, I chose to read this story because my good friend Ben told me to. He had recommended it for years and I finally came around to it. I am so glad I decided to read it because it is now to date my favorite book.

One thing I really liked about this story was that in this story, we are able to see John change over the course of the story. In the beginning, John is a lonely boy, with no real friends, who has to move roughly every year. But when he arrives in Paradise, he finds friends, ones he’ll keep forever. The social transformation he goes through is quite astonishing, especially because Paradise is a town of 5,000 people, so it’s not the place you’d expect to make friends.

I was surprised that Six found John in this story. I had previously assumed that each story in the series was about a different character, and they didn’t cross paths until later on, and I as the reader would have to piece the story together. While you do have to piece it together, the entrance of Number Six was quite abrupt and unexpected.

One thing I noticed was how subtle some things are that the author adds in the story. For example, when Six sees Bernie Kosar, she goes to ask John if he knows what it is, but Henri stops her. He wanted John to discover the true identity of the animal. At the beginning of the story, when Henri and John are still in Florida, John talks about a lizard that follows him around. Everywhere. In paradise, Bernie Kosar, the “dog”, runs to school with John everyday. Originally, I thought Bernie Kosar was a Mogadorian in hiding, but I was wrong.

Finally, I enjoyed this passage, where John and Six are fighting their first Mogadorian. Lore writes:

“I snap them (my lights) on. A Mogadorian stands amid the rubble, of the broken door. It smiles, blood seeping from the corner, where the door hit it. Black eyes, pale skin as though the sun has never touched it. A cave-dwelling creature risen from the dead. I look into its eyes and a pain tears through me so that I am stuck where I am, unable to move. Darkness falls. Sadness. My body stiffens.” (pg. 393). I really enjoyed this passage because it is the first time Lore describes what the Mogadorian looks like, and how their eyes rip terror through you when you look into their eyes. Henri always told John about the day they attacked, but never described what they looked like in-depth. Also, I liked the artful fragment used at the end of the passage. It helps show the effects the Mogadorian releases.

In conclusion, this is one of my favorite books of all time. I would definitely give it a 10 out of 10. It is an awesome series and I can’t wait to continue on.

3 thoughts on “Max Baer’s Letter Essay #7: I Am Number Four”