This is an interesting question and I can’t give a clear response because it makes a difference as to where the “place” is.  Also, every child is different as to their maturity level.  Going to the mall (in the day) and being dropped off is acceptable because even though you don’t have direct supervision, it’s a public place and you’re with friends.  So another variable would be the time of day, I wouldn’t be allowed in the evening but during the day is OK.  A good starting point for being without adult supervision is around ten or eleven years old and being able to ride your bike around the neighborhood.  I think the cell phones give adults a sense of security because they have a way to reach their child and check in on them. 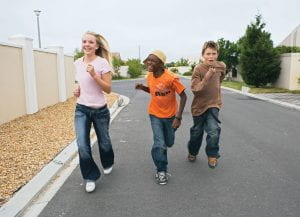 Being without your parents is like a right of passage. It makes you feel older and that your parents trust you.  My Mom always says; “it’s not a right but a privilege” and “I trust you, I just don’t trust other people in this world”. Evidently I won’t understand any of this until I have children of my own. But until I do, I do know that I feel great getting to go out with my friends without a parent or an adult following me around 24/7. People should be able to go out without parental supervision at age 13 because most kids mature at that age and most 12 and 13 year olds have phones so the parents don’t have to worry about their kids getting into trouble with robbers or assault.  I do realize that the maturity age of 12 is up for debate. If they don’t have a phone they could fend for themselves because teenagers could protect themselves, that’s why you should be 13 or 12 and not younger.  It also depends on the place you are going to because you could be 12 and go to the movie theater and watch a MA movie. At 15 you could do that and watch a movie by yourself or with friends but if you’re watching a PG-13 movie with friends it’s alright to go without a parent watching with you. It’s super important to let your child have a taste of the real world and be more independent and get ready for when you won’t be around all the time. This is why kids should be able to go out without parental supervision at age 12 or 13. I’m changing my word “kids” to “teens”, it sounds more mature.

If you don’t believe me check this out… At what age should kids be able to go out without adult supervision?