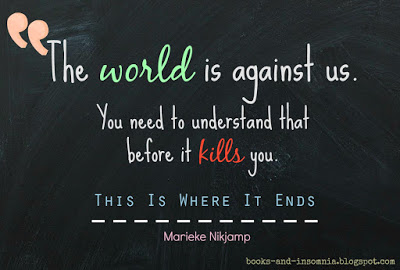 from the Netherlands. This book is told from four different points of view Tomás, Claire, Sylv (Sylvia), and Autumn. It is a very fast paced book that will always keep you on the edge of your seat and the cliffhangers are always at the right time. Everything in the book is perfect and it is what makes this book the amazing thing that it is.

Autumn Browne is a senior in high school and has had lots of troubles in her home ever since her mother had passed away. Her father abuses her and her brother is had been very distant and cruel since he dropped out of oppurtunity high in junior year which is the same high school Autumn attends. It is just a normal day at high school and Sylv is with Autumn, her girlfriend, in the auditorium just listening to their principal give her normal speech about how every kid has a destiny and they will do great things. Everyone is in the auditorium except for Sylv’s brother, Tomás, who is in the principal’s office looking for someones school history and he is there because Sylv asked him to look for it. He was looking for Tyler Browne’s school history report because his sister was scared about something, like something was going to happen to her, something bad. Tomás didn’t think anything of it at all but he did as he was told and had already known that Tyler was not the nicest and his grades went down since his mother’s death and that he was becoming a different person and he learned all of this from Sylv who had learned it from Autumn . Now Claire is also not attending the because she is at a track meet which is held outside of the school but not too far away and she is feeling luck that she didn’t have to attend the lecture because she hates it along with every other student in Opportunity High. It is now 11:04 and the lecture is finally over, as the students swarm out of their seats they head for the doors to get to class and get the day over with but as they go to open the doors they are locked but not from the key lock, like someone chained the doors from the outside. As the swarm of students try to open the door they are stopped by the sound of bullets hitting the ceiling. Screams come from the students and they duck and hide behind everything possible. Autumn is terrified by what she sees. It’s her brother. Tyler. She is horrified because she never knew that he was ever capable of doing what he was doing at that very moment. As her mind starts racing Tyler drives a bullet through the principal’s head which creates screams and cries from the students and staff watching. Sylv totally shuts down when she first sees Tyler because she knew that he would do something bad like this. She and Tyler have not had a good history because at the Junior school dance last year Tyler assaulted Sylv because he was mad at her and believed that she had changed Autumn and made her change towards Tyler even though Autumn just wanted to dance like her mother and Sylv was the only one who at the time still tried and helped her pursue her “destiny”. As all of this madness was happening Claire was still outside running with her track team and as soon as the first gunshot rang out everyone stopped running. At first they thought their captain had fired his gun to stop them from running but they realize that that wasn’t the case when they heard the screaming which was followed by two more gunshots. Claire is terrified because her brother, Matt, is inside and when she learns that it is Tyler who is the shooter she becomes even more terrified because they used to date but then she broke up with him when he assaulted Sylv at the school dance last year. This made Tyler sad and also very angry and the last thing that he said to her was,” One day I’ll show the world.” but she never could have known that he mean it like this. She is very worried because she feels that he will take out his anger for her on her little brother. Tomás is still in the principal’s office with his friend Fareed and then they are stopped by the sound of gunshots. He gets very nervous and try to figure out what was going on and tried to get help. Once he figured out that it was Tyler he realized why his sister was so worried about Tyler because he was supposed to re-enroll to opportunity this semester. Now Tyler is the main person everyone is worried about and he really messes with everyone whether it is physically, or mentally he is determined to break everyone on the room, especially Sylv. To find out what happens with Tyler, Tomás, Sylv, Autumn, and Claire read the book.

I would definitely recommend this book to anyone that can buy it because it is not currently in a library but it is very graphic in the sense of many details on the goriness of it all but otherwise anyone and everyone should read it. The author really put a lot of hard work and dedication into this novel and it really does show in her writing, and the cliffhangers in it too we’re just phenomenal, and that takes skill and hard work to get the reader so involved and taken to the world that the characters are living in too. Another great thing about the book is that it is not told by just one person which means that there is more than just one opinion, though, and overall mindset and writing and thinking of all of these different characters must have been so hard because they are so detailed which really means that the author cared for this book and that also shows.  Along with all of this detail and the different characters the author also added a time before each chapter to show what time period the chapter was actually happening in and that, for me at least, gave me a whole new perspective on the book because now I’m not really left wondering how long this whole thing was going or how fast people acted to try and do something and that really makes the book a whole lot better for everyone. I feel like all of the hard work and dedication toward the book also makes it special, not only for the author but the reader too. This is why this is now probably my favorite book and why it should also be on your favorites list.