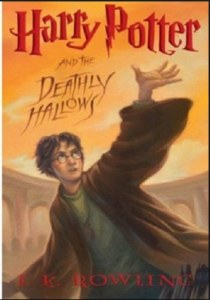 Recently I have just finished the first 200 pages of Harry Potter and the Deathly Hallows, a 759 page magical fantasy book by a Scottish Woman named J.K.Rowling, who has sold over 450 million copies(more daily recently with new covers) and has won 19 awards alone with the series. This book was published July 21, 2007. I picked this book for fact it is a reread and I forgot and didn’t quite understand everything when I read it in elementary school but because it was 7th and final book of the best series ever.

Harry Potter, 17 year old lean, teenage boy, a dropout from Hogwarts for security issues wants to find all the Horcruxes--a powerful object in which a Dark wizard or witch has hidden a fragment of his or her soul for the purpose of attaining immortality. Creating one Horcrux gave one the ability to anchor one’s own soul to earth if the body was destroyed, where’s Voldemort created 7–of Voldemort and destroy the Dark Lord himself with help of his friends Ron and Hermione. But with the fallen Ministry and the Daily Prophet taken over by the Death Eaters, filled with false information and the Order’s attempt to help them and Dumbledore’s death from the previous year overwhelming everybody in the wizarding community. Makes everyone in the world vulnerable to being tortured to death, forced to horrible crimes including killing innocent people, private properties, bridges, buildings, landmarks etc. destroyed and people killed just for fun. So Harry and his two friends are going to do something about the foul activity, to stick up the the Dark Lord themselves and his Death Eater followers and save the wizarding community and the muggle(non-magical people) community as well by killing the Lord’s Horcruxes first then the Lord in person as well to get riddance of the evil in the world.

I was a little frustrated that the author continued using dramatic irony in this book, not as much but just enough to frustrate me. I knew what the evilside was doing and the good side didn’t. I just want to yell at the characters cause that last piece of the puzzle the good side is missing is that part I read. Why don’t you know this? I read it. So can you, just turn to the 2nd chapter of the book I’m reading about you and read it. Then I need to remind myself that the characters can’t read about the book their in.

But otherwise the start of this book has more action than the other one and I prefer that. It makes the book interesting and it starts off intense and grabs my attention and nags at me to not put the book down and keep reading all night. Even the detail given in such short amount of text, things happen fast in the Harry Potter books. It just adds to the already heavy suspense making it an appealing book to most people. And i’ve noticed reflecting back upon the main characters and other characters in the past, they have really grown in height, maturity and age. Especially Dumbledore in his last year in age. But mostly Harry, Ron and Hermione, their magical abilities have increased immensely, their height and maturity and being able to look after one another as if they’re family. I love how the author showed their magical friendship bond. It shows true friendship since day one.

This next passage shows this bond of the 3, their friendship, trust and lives. Harry, Hermione and Ron are at Ron’s brother Bill’s wedding when while during the reception, the defensive spells break over the Burrow that protect the Weasley’s and Harry making every guest there a target of attack. Harry, Ron and Hermione apparating to Tottenham Court Road, away from all Death Eaters.

‘“Hermione, we haven’t got anything to change into,” Ron told her, as a young woman burst into raucous giggles at the sight of him.

“Why didn’t I make sure I had my Invisibility Cloak with me?” said Harry, inwardly cursing his own stupidity. “All last year I kept it on me and —”

“It’s okay, I’ve got the Cloak, I’ve got clothes for both of you,” said Hermione. “Just try and act naturally until — this will do.”

She led them down a side street, then into the shelter of a shadowy alleyway.

“When you say you’ve got the Cloak, and clothes…” said Harry frowning at Hermione, who was carrying nothing except her small beaded handbag, in which she was now rummaging.

“Yes, they’re here,” said Hermione, and to Harry and Ron’s utter astonishment, she pulled out a pair of jeans, a sweatshirt, some maroon socks, and finally the silvery Invisibility Cloak.

Looking back and reading on, I love how the author does this, she makes the characters come closer like family, they have over their years at Hogwarts, through the good and bad times made and incredible bond together, even learning how to live on their own at age 17 when most people today rely on their parents for food and money. They walk their own path now. Defending themselves from the most powerful people in the world who many grown, brave men can’t stand up to. If I were to rate this book so far I’d give it a 9.5. The beginning was not entirely like the other books, starts off fast moving and puts pieces of the puzzle together right on the spot as well as the book is very well written, chocked full of detail. Overall, so far I’m glued to the pages.