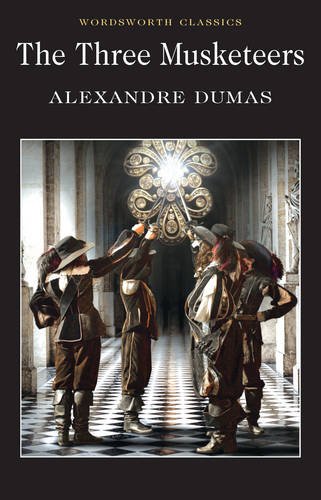 I am currently around two thirds of the way through society’s long-time classic, The Three Musketeers. Written by Alexandre Dumas in the early 19th century, this book offers glimpses into the elaborate world of the musketeers and follows the prominent trio and their companion, through their time serving as the king’s most respected guards. Dumas started off his career with the publishings of several successful plays and collections of essays written about infamous events, such as criminals from that time, or even controversial murderers. Only after he began receiving recognition from these did he begin to write novels. His first book as a career being an author was Le Capitaine Paul, written in 1838. He then proceeded to write several other titles until his most famous pieces emerged. Alexandre Dumas is mainly recognized for the works of The Three Musketeers, Twenty Years After, and The Count of Monte Cristo.

I first started reading this book last year, since I was practically coerced by my mother. I could find no joy in the 200 pages I had read, so to her disappointment, I put the book down and did not pick it up for a while. This year, while I was on vacation skiing in Utah, we discovered a cute coffee shop by the name of Atticus, that was also a bookstore. With the uncovering of a Three Musketeers with a very interesting cover and some persuasion from my mother, we left the shop with a new copy of the novel, and new hope instilled in my mom. Therefore, I decided to give it another try, and so far I have not been disappointed.

Being only around 450 pages through the book, I will summarize what I can of d’Artagnan’s adventures so far. The story starts off with the poor, young man from Gascony making his way to Paris for a fortune that he is sure awaits him. Unfortunately, on the way there, after a negative encounter, his impulsive personality leads to the losing of a letter written to M. de Treville, the captain of the musketeers, as well as his only chance of getting into them. Of course being from Gascony, d’Artagnan continues to his destination and still manages to make it to Treville, who immediately places him in M. de Essarts guards. Upon seeing the man who stole his letter, d’Artagnan goes after him, only to pick a duel along the way with three musketeers; Athos, Porthos, and Aramis. Because of the delay in scheduling the duels, d’Artagnan misses the man and proceeds to go to the agreed locations. Having heard of all the accomplishments of these three men, he knows that he stands no chance against them, but will die a proud death. Once the four men meet, they are ambushed by M. le Cardinal’s guards and are forced to fight together against their enemies. Upon a wonderful victory, the men’s relationship is formed and since then, they become inseparable. The book continues with the adventures of d’Artagnan, including his secretive mission of obtaining the diamond pendants from the Duke of Buckingham to save the Queen from being exposed by the Cardinal. Intertwined throughout the whole story is also his love from Madame Bonacieux, and later the mistake of meeting and falling in love with Milady de Winter. Though a complicated and complex story, I am definitely glad I picked up the book again.

I was surprised about the kind of measures that Milady de Winter is taking to try to kill d’Artagnan. After not only attempting to flat out murder him when he found her mark of the fleur-de-lis, she hired assassins to kill him. On the military mission of capturing La Rochelle, d’Artagnan who is lonesome without his three friends who were kept behind waiting for the King to return to good health, decides to go out alone. After this horrible decision, he is shot at by the two assassins and and later, while he is leading a dangerous mission they attempt again. I did not realize until now how grave the significance of the mark may be, for in that time period it is probably not acceptable for a woman of that caliber to have spent time in jail.

I like the way that the author is able to develop all the characters throughout the story. Being just over halfway through, I have a thorough understanding of all of the character’s personalities. It has gotten to a point where I could probably predict what one may do next. d’Artagnan, coming from Gascony is depicted to be an intelligent yet short-fused man, that likes to be prudent with money (unlike Porthos), is incredibly devoted to his dearest friends, and will not be stopped of doing anything when love is in question. Athos is definitely the calmest of them all, who never speaks unless is spoken to and is unheard of ever doing anything rash. Porthos, on the other hand, is obsessed with displaying his wealth and is a very temperamental person that refuses defeat on any level. Aramis, a man of the church, or at least one who would like to become one, has a more similar personality to Athos’; more quiet and discreet with his personal affairs but nonetheless a devoted Musketeer. These fully developed characters are certainly a major contributor to why this book is held of the highest regards.

I wish that the book would have had a little of a faster tempo in the beginning because the first 200 pages are a little slow. That was the reason why last year I was not able to continue past them. It is just around the when d’Artagnan is sent to retrieve the pendants for the Queen. After that, the action really begins but prior to this event, nothing really happened except for the formation of his relationship with the three musketeers. Although those pages offered a lot of insight into some history about not only d’Artagnan himself, but Paris as well and the time period that it was set in, I would have liked to see a little more happening.

One passage that struck me was when d’Artagnan had received word from the disappeared Madame Bonacieux that he could see her from a passing carriage. Not being able to resist his love for her, d’Artagnan went just to catch a glimpse of her, and of course was accompanied by his three compatriots. After seeing the love of his life, his disappointment was clear as Athos tried to console him.

“‘ Friend’, Athos said gravely, ‘remember that the dead are the only ones we’re in no danger of meeting again on earth. You and I both know something about that, don’t we? Now, if your mistress isn’t dead, if it was her we just saw, you’ll find her again one day or another. And, by God,’ he added with a typically misanthropic note, ‘maybe sooner than you’d like.’ (p. 417)”

I liked this passage because it was a clear demonstration of the type of person that Athos is. He is always the one to be giving advice, for his personality suggests that he is one with superior wisdom. Usually, he will only advise others when asked, but upon seeing the hurt that d’Artagnan was feeling, he tried to make his friend feel better. The way that Dumas was able to create the comradery that these four men have is truly amazing for you wouldn’t think anyone else is as good friends as these. I also liked that the advice he gave was very legitimate; don’t spend your time waiting around for someone when you will find them again eventually.

So far, I am really enjoying the story and will definitely finish the novel, as well as the sequels. It definitely owns a rightful place it people’s hearts as classic. I would give this a 9/10. I definitely recommend it to anyone looking for an interesting classic or just a book to read in general.