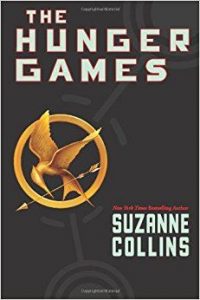 Recently, we have finished reading The Hunger Games, a dystopian book the New York Times bestselling author, Suzanne Collins, published on September 14, 2008. More than 23 million copies of The Hunger Games have been sold. We read The Hunger Games because our teacher, Mr. Jockers, assigned us this book in our book club.

The Hunger Games begins with a view of District 12, one of 12 districts run by The Capitol. It is the day of the reaping which happens every year. At the reaping, the name of one boy and one girl are selected as “tributes” from a large bowl containing the names of all the children in the district. The tributes that are selected will participate in The Hunger Games, where they will fight the other 11 districts tributes until only one remains alive.

One of the main characters is Katniss Everdeen. It is Katniss’s younger sister, Prim’s first time when she can be selected as a tribute. Prim has her name entered in the bowl once, whereas Katniss has her name entered multiple times. A person can have their name added more times than required in exchange for flour and oil.  A woman, Effie Tinker stands at a podium and reaches into a big bowl and pulls out a name. The girl selected is surprisingly Prim. Prim stands in the crowd, not knowing what to do but then slowly walks to the stage. It is at this moment that Katniss runs up behind her and volunteers as tribute. If someone volunteers as tribute, the person selected does not have to take part in the games. They are replaced by the volunteer. The male that is chosen is Peeta. Peeta works in a bread shop with his family. There is some history between Katniss and Peeta. At one time in the past Peeta tossed a loaf of bread secretly to Katniss when she was starving. Effie ushers Katniss and Peeta back stage into separate rooms. This is where they are allowed to say goodbye to their family and friends before they leave for the Capitol and the games. One of Katniss’s best friend Gale, her mother and Prim meet to say goodbye. Katniss tells her mother that she cannot disappear again and leave Prim to take care of herself. After Katniss’s father died a coal mining accident, Katniss’s mother became so depressed she barely moved. Katniss was forced to learn how to hunt, get food for the family and take care of Prim. Just before the guards make Katniss’s family leave, Prim gives her the Mockingjay pin that Katniss had previously given to her. Prim tells Katniss it is for good luck and she can win. The Mockingjay becomes a symbol representing Katniss and freedom from the Capitol.

The book continues with Peeta and Katniss getting on a train where there is elegant china and an abundance of food. Effie leaves to find their mentor Haymitch. Shortly after, Haymitch enters and is very drunk. Peeta and Katniss are very concerned because Haymitch is supposed to give them tips on how to survive the games. After a slight altercation Haymitch grabs a bottle of liquor and leaves.

All of the tributes must now prepare for a formal ceremony where they will be shown to the world. For this ceremony, each pair of tributes is decorated to represent their district by a special stylist. The pair enter a stadium riding a chariot for all of the Capitol and Districts to see. Katniss and Peeta make a huge entrance with a special outfit that has flames out the back. They capture the attention of the crowd and sponsors. Many of the other tributes are jealous. President Snow introduces The Hunger Games and gives a brief history. The tributes then leave the stadium and prepare for the next stage which is training.

The tributes must prepare for the games by learning about plants and weapons. Katniss has a special gift with bows and arrows while Peeta is very strong from lifting bags of flour. Part of this portion of the training is also showing off to the other tributes. After the training is complete, each tribute will enter the training area individually and demonstrate their skills to sponsors. Sponsors are those wealthy individuals who during the games can send in special gifts, such as medicine that might mean the difference between life and death. When it comes time for Katniss to demonstrate her skills, she misses the target with her first shot. The sponsors watching laugh and then go back to eating and drinking. This infuriates Katniss so she takes her next bow and aims it at the apple in the stuffed pig’s mouth, just in front of a few sponsors. She then bows and leaves. Effie is very concerned Katniss has just blown any chance of sponsorship, but in fact the opposite happens. She gets the highest score from the sponsors!

Each tribute is then dressed up and interviewed on TV. During Peeta’s interview he tells the world that he has had a crush on Katniss since he was young. Initially Katniss is furious but then realizes that they can use this to market themselves.

The games begin by sending each tribute up a tube into the arena. There is a large shell, called the Cornucopia located in the middle with weapons and other supplies the tributes will need. However, it is in the open and the tributes can easily be killed. Both Katniss and Peeta run for the woods. The book later begins to develop the relationship between Katniss and Peeta. They are declared the “star crossed lovers” and as Katniss nurses Peeta back to health after sustaining an injury,  their romance builds from there.

The tributes all face many horrible obstacles such as fireballs, deadly wasps and huge dog like attack animals. A large cannon sound marks the death of each tribute and each night those who have died are shown in the sky. Who will survive? You will just have to read the book yourself to find out.

We liked the way the author used signposts and humor. One of the signposts Suzanne Collins uses is flashback.  This occurred when Katniss volunteered as a tribute and Peeta, who was chosen as the male tribute stand on stage. While standing on stage, Katniss has a flashback about when she was younger, starving and scavenging for food. Peeta had purposely burnt the end of a loaf of bread so that he could give it to Katniss. By using this signpost the author made it more clear why Katniss was skeptical about Peeta. He had been so nice to her yet now she was faced with killing him. Another signpost that the author used was contrast and contradiction.  Throughout the book Katniss had to act as if she were in love with Peeta to stay alive. Haymitch had coached her through how to behave and why. Peeta did not know about it until the end of the book when Katniss tells Peeta. This is contrast and contradiction because the reader would have thought that Peeta would know it was pretend and just a plan to stay alive. By the author adding this signpost she adds a twist to the book. We also liked how the author used humor. There is one part in the beginning of the book where Peeta and Katniss meet Haymitch, their coach, and they ask him for advice. Haymitch responds with “Here’s some advice. Stay alive”. By Suzanne Collins adding this humor, she develops the characters personalities and makes the book more enjoyable to read. Another time when the author uses humor is when Katniss goes to show her skills to the sponsors.  She looks up at the sponsors after shooting a bullseye and notices they were not even watching her. She shoots an arrow through the apple that is in the roasted pig’s mouth, barely missing a sponsor. Katniss then says “Thank you for your consideration,” and walks out. By using humor the author develops suspense in the book. We have no idea how this will go over with the sponsors or President Snow.

The main character, Katniss, is the protagonist in the book. Her name comes from a plant that is safe to eat called a sagittaria. When her father was alive he always used to tell her if she could find herself she would be okay. Katniss became the provider of the family when her father died in a coal mine explosion. She is very protective of her younger sister, Prim, but does not have a great relationship with her mother. Katniss did not want Prim to participate in the hunger games so Katniss risked her life by volunteering as tribute.  In addition, Katniss is a great competitor because she can hunt and fight.

The climax of the plot is in the middle of the book when the Gamemakers announce that 2 people from the same district may win. This is the climax of the plot because it is the big turning point in the book. It is when Katniss and Peeta can work together to stay alive. In addition, it’s the first time when Katniss does not have to think of Peeta as a threat to her. She can see him as a partner instead of an enemy.

Finally, the quoted passage that stands out in our minds is the one that discusses their dislike for the Capital which includes The Hunger Games. Haymitch, Katniss, and Peeta are the characters in this scene. Suzanne Collins writes: “Haymitch startles me when he lays a hand on my back. Even now, in the middle of nowhere, he keeps his voice down. “Great job, you two. Just keep it up in the district until the cameras are gone. We should be okay.” I watched him head back to the train, avoiding Peeta’s eyes.

“What’s he mean? Peeta asks me.

“It’s the Capitol. They didn’t like our stunt with the berries.” I blurt out.

“What? What are you talking about?” he says

“It seemed too rebellious. So, Haymitch has been coaching me through the last few days so I didn’t make it worse,” I say

“Coaching you? But not me,” says Peeta

“He knew you were smart enough to get it right,” I say.

What we loved about this passage is that it really highlights a plot twist and the signpost contrast and contradiction, which makes the reader wonder why Peeta didn’t know about the coaching. What does this mean for the two of them and their relationship? Katniss and Peeta seems unsure about what is going to happen next. Throughout the book there are many plot twists which is what makes it an interesting book. The Hunger Games is a 7 out of 10.