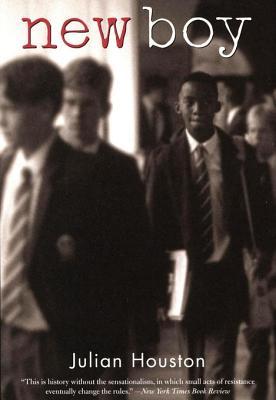 Recently, I finished reading New Boy, a 280 page historical fiction by an American author Julian Houston, who is out of Richmond Virginia coming up to live in Harlem to teach.

New Boy is mostly famous for being based on early events of the author’s life in the early 1950s’ and expresses this clearly by saying racist comments from the time of segregation in Harlem. Instead of it being told by the author it is told in the perspective of a 15 year old, african american named Rob Garrett. Rob is going to a boarding school in Connecticut called Draper and he was going to be the first colored boy in the program’s history. It is praised by the audience it is appointed to, which is for people in middle school and is really treasured by people who were around by people who were around in this time and it makes perfect sense since its events take place during segregation in the south and north. When I first picked up the book and opened it I thought it was going to be about how an african-american gets rejected by every white male who escaped slavery and moved north.  When I got into the first chapter and read on I was blown away by what happened which was nothing that I predicted and I was glued to the book and couldn’t put it down.

In the book, Rob wants to escape the segregated south, but in the late 1950s’ Virginia (which was where Rob was born), those types of opportunities don’t come very easily for an african american slave so, Rob’s parents enrolled him into Draper. Vinnie (Rob’s best friend) wants to make friends, but he normally gets picked on because his many different types of problems and poor hygiene, so he must leave his dorm and live in the campuses infirmary. Gordie wants to be able to show Rob what it is like to be a white male and takes him places like jazz clubs in the streets of Harlem, but when Rob and Gordie find a person named Malcolm he shows them that Gordie’s chauffeur named Tyrone has been working for Malcolm, so when Gordie calls for Tyrone and doesn’t respond and Gordie and Rob run, this triggers Malcolm to call them racial terms that offend Rob and Gordie.

I was surprised, when Rob had been enrolled into Draper and never got called out by any of the white kids or any of the teachers when they realized that Rob was a black person and even when he did the kids and teachers never cared and none of the kids made any cruel remarks about Rob being african american and Rob got all the same learning as all the other students in the school .

I liked how the author, went into such detail into the streets of harlem all the way to the subway station that Rob was in from saying this on page 52 “I emerged from the subway at the corner of 125th Street and looked around. There were shops and businesses, stretching as far as the eye could see. With my bag in hand, I started to walk. Along both sides of the street, there were banks, restaurants, theaters, supermarkets, pawn shops, even a department store right in the middle of a negro community.” That shows me how much detail and description has gone into this book.

In some ways, this book reminds me of Time Square New York on a Christmas week. I say that because in the book the streets are always full of people coming in and out of shops, walking around the streets with a load of bags from many different shops, people always trying to get to one place trying not to bump into anyone.

Finally, I was interested in this passage, when Rob is trying to convince his parents to wire him money to go back to virginia to protest against segregation in the south. Julian Houston writes this:

“I don’t know, son,” she says. “I need to talk to your father. Of course we’d love to have you, but Robby, it sounds like there might be trouble. Don’t you think there could be trouble?”

What I love about this passage is that it really highlights what really is happening down in Virginia back in the 1950s’ and it also really shows how Rob is committed to make this world a better place and it shows how much his mom cares about him saying that the white males down there would shoot them in broad daylight. Much of the book is like this and that is why I really lied to read it. I give this book a 7-10 and I would re-read this book anyday.