Recently, I have read The Sun and her Flowers, a 256-page collection of poetry by New York Times Bestselling author, Rupi Kaur. In 2017, she released her second collection following her first and wildly popular novel, Milk, and Honey from 2014.

I was a huge fan of the first, but this collection just wasn’t as good. I chose this book actually because I was such a big fan of the first. It still has many of the same characteristics of milk and honey. It still follows many of the same structures, but it doesn’t have the same feeling for me. Don’t get me wrong, it’s a beautiful and a great work, but Milk and Honey set really high standards, and it simply did not meet them. A critic from the London Times calls her, “the poet who touched a nerve.” I completely agree with this in the first book, but not as much this one.

The Sun and her Flowers is similar to Milk and Honey, where it is separated into different ‘chapters’, each dealing with a different pain. In the Sun and her Flowers, the collection is split into 5 sections – wilting, falling, rooting, rising, blooming. This book primarily deals with self-discovery. It follows her journey and thoughts on immigration, body images, and self-confidence.

Just like in my letter-essay on Milk and Honey, I will be comparing this author to another author/book. I would compare her to r.h. Sin.

I would compare The Sun and her Flowers to this poem,

are the flowers of this earth

they bloom through tough conditions

they bloom for themselves

Besides from being about flowers, which happens to be a coincidence, this poem is about topics Kaur writes about. Both are about self-discovery and growth. Along with that, they both write stylistically the same. Kaur and Sin both don’t use capitals or punctuation. I respect Kaurs more, however, because unlike Sin she does not avoid punctuation or capitalization for looks, she does it to honor her religion and culture.

If I was the author I would have cut a few of the poems. While everyone’s favorite poems vary, I think a few of them was unnecessary. I didn’t like all of the poems, but someone might of so someone might have wanted to keep them. Some of the beauty in Kaur’s poetry comes from simplicity, and I think the book would have been better if there were a few fewer poems.

I wish that Kaur would release her third collection because I am such a fan of the others. I hope that she continues the topic of growth and self-discovery because I think its something she does well and it’s something that we need, especially the younger readers. She’s a very empowering writer and the parts she covered that topic were my favorites. Now, that Kaur’s books are being read by wider audiences, I think its a topic we can all relate too. Many people can’t relate to love, loss, racial prejudice, or immigration, but we can all relate to trying to find and improve ourselves.

I liked how the author wrote about topics that werepersonal to her. As I said before, not all of us may be able to relate to immigration or sexual abuse, but she wrote what was important to her.

I was struck by this poem from the blooming on.

what is the greatest lesson a woman should learn

that since day one

she’s had everything she needs within herself

it’s the world that convinced her she did not

I love this poem because it’s empowering to all women. It doesn’t matter your age, but its saying that you can do what ever you want to accomplish. 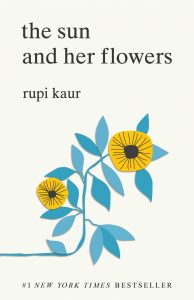