Did you know that things like the low pay, abuse, and the pandemic have triggered many referees to leave youth sports? Insufficient numbers of referees has become a worldwide issue due to the fact that less and less referees are willing to work with youth sports. And because of this, youth sports are taking a major hit.

Today, youth sport referees in the state of Connecticut are being paid about $36,798 per year. If you think about it, that is barely enough money to pay for bills and provide for their families. Referee shortages are getting worse and worse, the loss of hundreds of referees each season could lead to game cancellations and delays. If youth sports games are continuously being cancelled due to the lack of referees, many kids around the US will not be able to play the sports they love, which will affect their physical and mental health. It is a scientific fact that kids need at least 60 minutes of physical activity a day to stay fit and healthy- and without the opportunity to play, they are losing precious time for exercise. Most referees now who started during the pandemic are inexperienced with referring because they only started it to make money during this harsh time. Many of those referees have actually been charged with officiating fast paced games, which seriously endangers the players. Most of the new referees have also been shown to show bias to their home teams which encourages them to make bad calls and giving their favored team an advantage in the game. In a recent study, INSIDER stated that “youth sport referees are quitting due to a toxic combination of abuse from coaches and parents, low salaries, and Covid-19”. This fact proves my point of the toxicity in the referee community.

A potential solution that could fix this problem is raising the wages for referees. This solution would make it so more people become more interested in reffing, especially due to the fact they know they will be able to pay their bills. The Connecticut State Referee Program (CSRP) needs to increase the referees wages and standards so that there will be more qualified referees to choose from. This problem needs to be fixed now so that there will be no significant effects on youth sports any time soon. 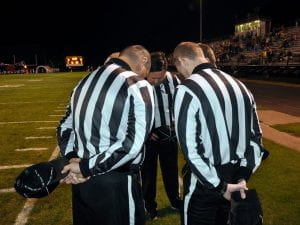