I just finished reading Michael Vey storm of lighting a 271 page novel written by Richard Paul Evans. Michael Vey Storm of Lighting was published on September 15th 2015. The author Richard Pual Evans is the best selling author of the books in the Michael Vey series. Some of the books are: The Christmas Box, The Walk series, as well as 20 other books. There are more then 17 million copies of his print. His books have also been published in 24 different langueges and many have been international best sellers. He is a very popular writter and I understand why. This is a very very good book. It is the 5th book in the series. I think some of the others are better but this one is very good. This one is probably my 2nd or 3rd favorite book in the series.

In the book Michael Vey the main character and the most important is Micheal Vey. There are many other supporting characters in the book. Taylor and Ostin are probably the biggest 2 supporting characters. Michael Vey has electric powers and he is the leader of the Electro-Clan, He also has the strongest powers and continues to grow more and more powerful. Taylor is also electric. Her powers aren’t as strong but they are still very useful. Ostin is not electric at all. In the book he is known as a regular human. But he is very inteligent, his smarts help the electro clan a lot. In this book the electro clan has to save Taylors mom and dad from the Elgen. (The elgen are the bad guys in the book. They want to take over the world.) The electro clan must save her parents before it is too late. This book sets up a huge conflict for the next book.

I really liked how the author ended this book. It is one of the biggest cliff hangers I have ever expierenced in my time reading. It set up a huge problem for the next book. It got me so excited to read the next book. (Sadly it doesn’t come out for over a year.) However this ending kept me thinking and thinking. I still don’t know what will happen next.

“Giacomo Schema,” the voice said. “It’s good to see you again. Not a pleasure mind you, but good. We have much work to do.” Schema stared, speechless. When he could speak he said,”Impossible. This is impossible. How could it be you?” (pg: 271)

The book ends just like this. If you read the book before this one and this book then I’m sure you would be wondering the same thing as me. Who is the voice. The author has purposly kept him secret so far. Everyone must be dying to know who he is. Could he be Hatch, could he be Michaels dad? Nobody knows yet. I would recomend this book to anyone that has read the first four but if you have not read those then I suggest that you read those before jumping to this one. I would give this book a 9 out of 10. 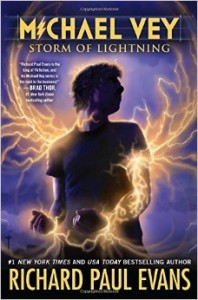