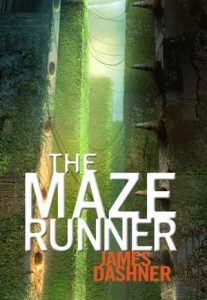 Recently, we have finished The Maze Runner, a 374 page, action- adventure/ sci-fi novel that was published in 2009. The author, James Dashner, not only wrote The Maze Runner, but the whole series that consists of  four books; The Maze Runner, The Scorch Trials, The Death Cure, and The Kill Order. This whole series was the New York Times #1 best seller. He also wrote The Eye of Minds and The Rule of Thoughts. We decided to read this book because it was an acclaimed series and no one else in the class was reading it. Plus, all the hype about the whole series can’t lie because so many people said the same thing about the novel. We thought the book was very well written. It had a little (or a lot) of everything you could want in a book. Suspense, problems, romance, conflicts, and any other thing you can think of. It is a good fit for everyone.

In the novel The Maze Runner, a futuristic society wants to end a disease that has been ravaging the planet and causing people to lose their minds. It is called the flare. People must force young boys to go through experiments in order to find a cure for the deadly disease. They are put into a maze and must complete a series of trials to continue the tests that are being done. They are trapped by the iron and stone walls of the maze and cannot escape unless the maze is solved. They have to solve the patterns of how the walls in the maze move so they can get back to their lives. But they don’t know how bad the world has gotten. The disease had spread all over and the boys missed out on their entire childhoods. Then Thomas arrives. He is different than all the other boys. He is smarter. When he arrives he triggers many new things to happen. So when things start to go bad in the maze, they must find a way out before it is too late. Everything is going to change.

We noticed that the author included that the griever sting causes people to go crazy. In the passage we are about to share, Thomas went on a walk in the woods inside the Glade. But Ben, a boy who had been stung by a griever was there and he proceeded to attack Thomas. The passage goes, “Thomas squirmed away on his hands and feet, sucking in breaths of air, and got his first look at the crazed attacker. It was the sick boy, Ben… Ropelike veins ran across his body, pulsing and green.. His bloodshot eyes fell on Thomas as if he were his next meal.”(Pages 71-72). We like this part because it showed a flaw in the Glade. We believe that this may show something about what else may happen later in the book. The sting makes you see what Thomas and creators did to put the boys in the Glade. This could cause people to turn on each other, and later on in the book, it did drive a wedge between the boys. It also sometimes causes people to lose their minds and attack others in the Glade. With this happening, it could affect the whole experiment that the creators are doing.

In another part of the book, Thomas had just arrived at the Glade and it was his first night there. In the night, another kid, Chuck, who was the new kid or “green bean” before Thomas woke him up. He told Thomas to follow him and when Thomas asked where they were going, he told Thomas it was a surprise. Little did Thomas know that Chuck was really leading him to play a prank on one of the meanest people in the Glade, Gally. The passage goes, “Then he reached up and tapped the glass. ‘This is stupid.’ Thomas whispered. There couldn’t possibly be a worse time to play a joke, Newt or Alby could be in there. ‘I don’t wanna get in trouble; I just got here!’… ‘Who’s that!’ yelled the boy from the bathroom, his voice scratchy and laced with anger… ‘I’m gonna kill you shuck face!’ Gally yelled…” (Page 31). It really surprised us that Thomas would go into whatever Chuck was doing so unknowingly. We felt that this was a really dumb course of action. If you are told to do something and the person telling you can’t tell you what it is, then just don’t do it. We liked this passage of writing because it seemed to show the character of both Chuck and Thomas. This passage really showed that Chuck is very mature and that at this point in the book, Thomas’ decision making needed to improve.

Also, we really liked in one part of the book how the author shows irony. In one part of the book, Thomas rushed into the Maze which traps the boys in the glade. However, at the time he was not a runner (a person who runs the maze to find the way out) so he was breaking the number one rule of the Glade. Never go in the Maze if you are not a runner and never at night! So while he may have been an absolute hero by saving both Alby and Minho and surviving the Maze with the Grievers for a whole night, in the part we are about to quote, the boys are deciding how to punish Thomas for running into the Maze.The passage goes “How stupid is this- he saves Alby’s life, kills a couple grievers, and we’re here talking about what to do with him.” (Page 154). We really liked this passage of writing because it is ironic. We believe this is situational irony because you expect the boys to commend Thomas for his work but no, they decide not punish him. We thought the author did a very good job of showing this.

In conclusion, we think that this was a very good book. Not only was it thrilling and suspenseful, but it had a really good plot as well. For that reason, we give this book an 8.5 out of 10. It is a really good book that you will want to reread.