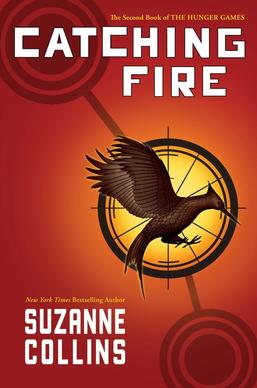 Recently, we finished reading Catching Fire, a 391 page dystopian novel written by Suzanne Collins.  Catching Fire is only one of the many best-selling books written by Suzanne Collins.  This novel is the sequel to the well-known book The Hunger Games.  Both The Hunger Games and Catching Fire have won many prestigious awards some being The #1 USA Today Bestseller, #1 New York Times Bestseller, and another being The Goodreads Choice Awards All-Time Favorite.  After college Collins decided to work in television.  She wrote several children’s television programs such as Clarissa Explains It All and Little Bear.  Her work was seen by James Proimos, creator of Generation O, and he urged Collins to try to write books.  She quickly became an outstanding author and is now well-known for writing remarkable Young Adult literature.

We decided to read this book because we had to choose a dystopian novel to read. All of us had read and enjoyed the first book, The Hunger Games, and wanted to read the next in the series.

Catching Fire is about a fearless 17 year old girl named Katniss Everdeen.  In this sequel to The Hunger Games, Katniss is chosen to once again compete in the annual hunger games. But, this year’s games are special and deadlier than ever before.  Every 25 years there is a Quarter Quell, a unique edition of the hunger games.  These games represent the unity of the Capitol and the 12 districts.  This year is the 75th annual hunger games, a Quarter Quell, and in these games the previous victors are reaped.  Katniss is the only female victor from District 12 meaning that she is the assured tribute for this years’ games.  The 75th hunger games will be much harder because experienced people are playing; these victors are smart, cunning, and ruthless.  Katniss ends up going into these games with Peeta.  She will not only fight to save her life but also his.  These games will prove to be harder than anything Katniss has ever faced.  She has already survived one hunger games but the challenge is to survive another.

The main character, Katniss Everdeen, is a role model for youth across the world.  Katniss is a smart, selfless, brave and independent female.  She is a strong female lead and a heroine throughout this book.  Katniss is very similar to other novel characters such as Tris from Divergent and the brave Coraline. In the book Coraline by Neil Gaiman, Coraline went into the other mother’s world willingly to save her real parents, she knew she could be trapped in the world with the other mother forever.  She showed courage throughout that book, similar to Katniss. Katniss’s plan was to protect Peeta, she would do anything in her power to keep Peeta alive. Throughout the games the Gamemakers create seemingly impossible obstacles. An example of this is when deadly fog, created by the gamemakers, is seeping out of the forest, Katniss stays to help Peeta who is having trouble keeping up. Even though her initial instinct is to run, she stays with him and tries to save him and not herself. This is very brave and selfless act.

The dystopian genre is defined as an imaginary society that is dehumanizing and as unpleasant as possible.  This is a great description of The Hunger Games and Catching Fire.  Catching Fire is about The Capitol trying to create a perfect society. In dystopian books something always goes wrong, in this case it is when Katniss innocently sparks a rebellion.  Several of the districts are starting to fight back and many people run away to “District 13.”  This district is supposedly destroyed but no one really knows the truth about what happened there.  Katniss accidentally starting a rebellion is the only act of defiance in 74 years.  Ever since the “perfect” society of Panem was formed, there has never been an uprising. But, Katniss has changed all of this.  She has changed Panem forever.

We decided that the climax of the novel Catching Fire was when all of the victors were inside of the arena again. This is where we thought most of the action and violence was. According to www.reference.com, “The climax of a story is the moment when all events come together for its peak intensity. This is usually located in the third part of a story.” This applied to our book because it was the point where all of the training and planning unfolded. They had already made alliances and back at district 12 Haymitch, Peeta and Katniss had trained hard after finding out that 2 out of 3 of them were returning to the games. Also, the games started on the first page of part three of the book. This part was titled “The Enemy”.

We were interested in the passage when the gamemakers are attacking the tributes with the poisonous fog. Collins writes: “Tiny, searing stabs. Wherever the droplets of mist touch my skin.

Finnick snaps awake instantly , rising to counter an enemy. But when he sees the wall of fog, he tosses a still sleeping Mags onto his back and takes off. Peeta is on his feet but not as alert. I grab his arm and begin to propel him through the jungle after Finnick. (p.298)”

What we like about this passage is that it shows Katniss’s loyalty and kindness. She could have easily run without warning the others and let the fog take care of the competition, but she woke everyone up and helped Peeta escape. This passage also shows Collins skills as a writer, as she set the tone for the readers.  The tone is frantic because Katniss is clearly bewildered and very fearful.  She does not know what this mist is, all she knows is that it is very dangerous and most likely lethal.  It also shows how descriptive she is. With her word choice, we could almost feel the droplets on our arms and imagine the fog.  We enjoyed reading this book and would rate it a 9 out of 10.