“I was lying in bed, and I was channel surfing between reality TV programs and actual war coverage. On one channel, there’s a group of young people competing for I don’t even know; and on the next, there’s a group of young people fighting in an actual war. I was really tired, and the lines between these stories started to blur in a very unsettling way. That’s the moment when Katniss’s story came to me.”

The story takes place in North America, at The Capital,a wealthy city where people are very shallow and have very unique appearances. They  force a man and a woman from 12 districts to fight to the death. This book takes the perspective of Katniss Everdeen from district 12. District 12 is where poor families live in the hollows and they have limited resources. In the beginning, The Capitol choses the female tributes, and  Katniss’s sister, Prim is the chosen tribute for the games. Katniss immediately takes the place of Prim as the first volunteer ever in the Hunger Games because she doesn’t want to risk losing her little sister since she already lost her father from a mine explosion. Next is the male tribute, Peeta Mellark. Katniss realizes that she already met him years ago. A flashback comes to her  while she’s on stage. Katniss was searching for food for her family in the garbage bins behind the town shops when Peeta gave her bread from his family’s bakery. Peeta and Katniss say their last goodbyes to their families and her best friend Gale. She tells Gale to take her place and hunt for her family. Katniss, is  in the friendzone with Gale and Peeta but both of them crushing on her. During the games, Katniss can only rely on her hunting skills and sharp instincts. In the arena Katniss, must choose between survival and  love.

We like the way the author included this passage at the beginning of the book when Katniss is getting ready to leave.  “Then something unexpected happens. At least, I don’t expect it because I don’t think of District 12 as a place that cares about me. But a shift has occurred since I stepped up to take Prim’s place, and now it seems I have become someone precious. At first one, then another, then almost every member of the crowd touches the three middle fingers of their left hand to their lips and holds it out to me. It is an old and rarely used gesture of our district, occasionally seen at funerals. I means thanks, it means admiration, it means good-bye to someone you love”. (2.17) This passage stood out to us because Katniss has changed the way her community sees her by giving her respect, admiration and love for the choice she has made. We also like how she shows that she isn’t afraid to put herself in front of her family when risks are being made.

We didn’t like  Katniss’s reaction towards Peeta when he admitted to Caesar that he liked her. Peeta admitted that he has a crush on Katniss, but as the interview concludes the crowd goes nuts for Peeta and he feels relieved to get that out of his system. But here’s where it backfires, Katniss is furious and pushes Peeta into an urn, bloodying his hands. She yells at him that he had no right to make her look like a fool. I think Katniss should have accepted this as a way to get more sponsors and shouldn’t have lashed out on Peeta so violently.

We were surprised when the game makers allowed Peeta and Katniss to both win the games and instead of  just one tribute. This was surprising because the gamemakers never let there be more than one winner in the games. It also surprised us how Katniss and Peeta threatened to kill themselves if they both didn’t win. This shows us that they really care about each other even though before this Katniss was never affectionate towards Peeta. Toward the end of the games,Katniss and Peeta must decide which one of them will die,

“No,” he says. “Do it”. Peeta limps toward me and thrusts the weapons back in my hands.

“Do it. Before they send those mutts back or something. I don’t want to die like Cato,” he says.

“Then you shoot me,” I say furiously, shoving the weapons back at him. “You shoot me and go home and live with it!” And as I say it, I know right here, right now would be the easier of the two.”

This passage shows that love has triumphed over the evil of The Capital, and basically Katniss and Peeta have won. This is an important message because it sends such a positive message. The Hunger Games is a 7 out of 10 because there was not much action in the beginning of the book until the games. If this book was to be rewritten it would be interesting if Gale was the chosen tribute, and then the conflict would happen earlier and Gale would open up to her romantically. 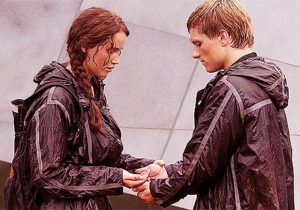