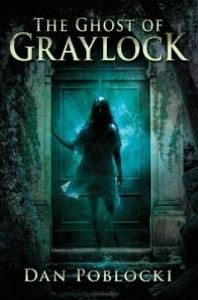 Recently I finished the book The Ghost of Graylock Halls. The Ghost of Graylock Halls Is a 272-page fiction novel. Written by Dan Poblocki. Dan Poblocki is an American author of mystery and horror novels for teens. Born in Providence, Rhode Island he grew up in Basking Ridge, New Jersey. Dan Poblocki is an author of many young people’s mystery and horror novels. I wanted to read this book because I haven’t found a truly scary book this year and I really want to keep trying. When I saw this book in the library I knew I wanted to read it because of the back cover. On the back of the book, the passage drew me in. I also really wanted to read it because I always enjoyed horror and thrillers. I always thought that books like this created more thinking for me because there are more emotions. I didn’t really think this was going to be as good but as I read it got better. I would recommend this to my friends it is a very good book and it portrays a lot of important character change and inner thinking.

The Ghost of Graylock Hall published in 2012 is about a young boy Neil cady and his sister Brie. They stay with their aunt over the summer because their mom has become sick and their dad has abandoned them. They make new friends Wesley and Eric. They set out to explore Graylock hall, an abandoned Psychiatric Hospital. It was meant to be a place of healing a hospital where children and teenagers with mental disorders would be cared for and even cured, but something went wrong. Several young patients died under mysterious circumstances, eventually the hospital was shut down the building was abandoned, left to rot deep in the woods. Which is supposed to be haunted by the ghost of Nurse Janet. After Neil went exploring with his friends, Neil was never prepared for what would follow him home.

In the beginning of this novel once Brie, Neil sister, is introduced into the picture you get to know a lot about her. But as Brie is created even more by the author. the author adds a lot of contrasting contradictions in the beginning. At the beginning of the story, Neil is planning to hang out with his new friend Wesley. But when Brie finds him going outside she quickly snaps to ask where he is going. In this example, brie sides with the nerdy brother and says “I’m coming with you.” This surprised me very much because brie being a moody teenage girl normally should want nothing to do with a silly young boy adventure.

I also very much like how in the novel the author incorporated words of the wiser when talking to Andy, a character from the novel tied heavily to a death at Greylock. When Neil comes to Andy after having a  paranormal experience with his friends. Andy gives Neil advice “Don’t go near that place it’s nothing but trouble” he drills into their heads. Andy’s advice is taken lightly by Neil and his friends because they were very intrigued by what has happened at Greylock. Like everyone else in the town at one point, they wanted to investigate. When Andy gave this advice they took it with a grain of salt.

Near the end of this novel, I was very interested in a passage. As Neil experiences night terrors he explains what he saw resulting is a tremendous explanation of his straining experiences. It reads:

“ She looked once more into his eyes and said, ‘ thank you, Neil.’ She released his hands and kicked for the surface. Quickly, he realizes that there was no surface. They were floating in a Darkness deeper than the one at Greylock Lake. And he knew that the light was farther away than the moon was from the Earth. Rebecca appeared to grow smaller as she ascended into the illusion of distance. When both she and the Mysterious silver light had finally gone, Neil woke up.”(263 pg.)

What I really enjoyed about this passage is it sums up and concludes a huge mystery throughout the story.  It shows a conclusion of the author’s craft and the huge hole in the plot is now set up and concealed. It sets Neil up to understand what his last experience at Greylock meant. It shows how thankful Rebecca was for what he truly did and it also shows that even though Neil thought he was crazy he wasn’t. I would rate this book a 7 out of 10.

2 thoughts on “Katie Letter-Essay #3: The Ghost of Graylock Halls”