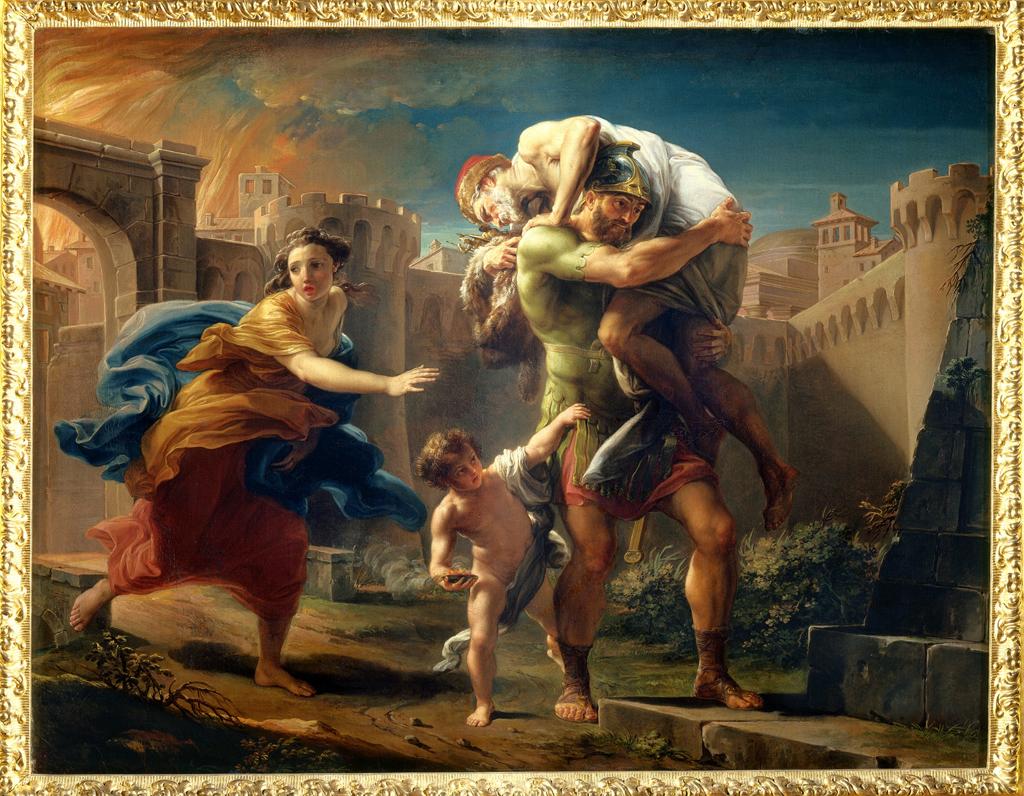 Aeneas and his family running away from Ilium/Troy.

I hated the Aeneid.

I recently read it, and after reading Homer, this 442 page long classic (written in the style of poetry) by Virgil, is extremely boring.  Robert Fitzgerald’s translation was published in 1983 and is very, very bland. If books were food, this would be the dryest and least seasoned piece of chicken ever.

Virgil was a Roman, and his full name is Publius Vergilius Maro (well, that overly fancy mouthful fits the book).  He lived October 15, 70 B.C. to September 21, 19 BC. At the time of his death, his epic, the Aeneid, was unfinished.  He was regarded by the Romans as their greatest poet. The Aeneid is the story of the Trojans journey from the sacked Troy to Italy.  I read this because I read Homer’s Iliad and Odyssey and thought I might as well read the Aeneid as well, as it is based around the Trojan War as well.

The Trojans want to bring the wooden horse statue into their city.  So they do. However, when night comes, the Greeks jump out and sack the city.  Aeneas wants to get his family- his father, wife, and son- out. But his wife falls behind and his father is old and weak.  So he takes his father and son to safety and then wanders the city until he meets his wife’s ghost. She tells him about his destiny to get to Italy.  So he goes to where his father and son are and sees more people are there. They start travelling when the Greeks leave. They eventually get to Libya, where Queen Dido lives.  Dido wants to marry Aeneas, and the gods want that too. But Aeneas is mourning losing his wife. So the gods trap them in a cave together and marry them. Jove (Jupiter/Zeus) then sends Mercury down to tell Aeneas to keep travelling.  But Dido would have never allowed them to go, so they sneak out in the middle of the night. Dido later commits suicide. (Wow, way to write a strong female character. That was sarcasm.) The Trojans then arrive at a friendly land- Sicily.  They hang out with the people there who are their allies and do some random competitions. But they must still leave. So Juno goes down and convinces the women there to burn all the ships. However, several ships are saved and they set off for Italy again, allowing some people to stay behind.  When they get to Italy, Aeneas instantly goes to visit the underworld (because Virgil didn’t know what you actually did when you settled a place). They later meet up with the king of the Latins (named Latinus), who has a daughter named Lavinia. The king wants Aeneas and Lavina to be married, but Queen Amata is afraid the Trojans will take her daughter and leave.  So she gets a bunch of women to go into the woods and act like crazies with her. Because that is obviously what you do. War starts when Ascanius, Aeneas’ son, shoots a pet deer of some Latin herdsmen. The suitor Amata wants Lavina to marry- Turnus- starts a war with the Trojans. Aeneas sails up the river to get military support from tribe there. When he returns, a son of his new ally is killed.  There is then a truce to bury the dead. Aeneas fights one of the enemy leaders, but the duel is interrupted. So the Trojans burn down a Latin city. Not so evil when you’re the one doing it, eh, hypocrite?

So why do I prefer Homer’s books over Virgil’s?  Well, for one, he didn’t steal his entire story. And, more importantly, his (Homer’s) are just written in a much more interesting style.  The Aeneid is written in a very somber, explanatory voice that is mainly trying to connect Rome to Troy and honor Rome and Caesar. In fact, it was commissioned by the Caesar to be about him.  The Iliad and Odyssey are both written in a more story-for-the-sake-of-a-story form. They are much more interesting and alive. From the Aeneid, here are the first two full sentences, in the format they are found,

“I sing of warfare and a man at war.

From the sea-coast of Troy in early days

He came to Italy by destiny,

To our Lavinian western shore,

A fugitive, this captain, buffeted

Cruelly on land as on the sea

By blows from powers of the air- behind them

This is a pile of horsefeathers.  8 lines for two sentences?! The following is from the Odyssey “Now all the others who were saved from utter ruin were at home, safe from both war and sea.  Him only, longing for his home and wife, the potent nymph Calypso, a heavenly goddess, held in her hidden grotto, desiring him to be her husband” (pg 1). Much, much better, even when very similar, especially since this was an example I tried to find on the first page, a space reserved for an introduction from a writer about the story in these.

The theme of this book is… following destiny and being brave against a very angry goddess, I guess.  Plus that women are evil and easily corruptible. A prophecy is mentioned multiple times that Aeneas’ line will be the one to found the greatest empire ever.  At several points, he veers away from following the prophecy to go to Italy. Like stopping in Libya. Multiple times, Hera- errr…. Juno accidentally gives it away to the mortals that she’s making life very very difficult for them, so this book is also about facing evil women.  This book has a lot of not-so-great scenes to do with women. Obviously, for one, Juno is one of the main antagonists. Another example of this is Dido’s madness and passion once Aeneas runs away. During her madness, she makes a speech about her hate for him before committing suicide, including these lines:

“Could I not then have torn him limb from limb

And flung the pieces on the sea? His company,

Even Ascanius could I not have minced

For the time, these are grave wrongdoings.  To do this is condemning someone to a century of waiting to cross to the underworld.  Later, when the Trojans are docked in Sicily, the women are shown to be easily tricked by and corrupted by Juno, even with warning.  They are the only ones to have been shown as being tricked by Juno. Mortal women are rarely shown as good or interesting. They’re just plain cut-outs.  And this has even less examples of strong, interesting characters in the goddesses. We barely see any goddesses other than Venus, a bit of a helpless crybaby in the book, and Juno, shown as evil just to be evil.

Since this is getting to be an extremely long thing that’s mostly complaints, I have to say that the amount of culture included is the best part of the book.  We get to see how Romans saw life at that time period as, and we get to see more of the Roman idea of their founding. Classics are a great way to see into the mind of a civilization, because popular books are usually ones that agree with the ideologies of a group.  Like how The Hunger Games agrees with our modern ideals of rebellion, the common becoming heroes, and democracy. If that was written by the Romans or Greeks, Katniss would be a demigod where the ending is that she gains immortality and the victims of The Hunger Games would rise to places of power.  The games would go on, though, and the power system wouldn’t be replaced with a democracy. I just use The Hunger Games as an example a lot because it’s well known and really shows the ideals of our time.

One passage I really took note of was this, when Allecto gets Turnus to go to war with the Trojans she says, after casting off a disguise of an old seer:

“Look at me now, sunk in decay, see how

Old age in me is too far gone for truth

Deluding me with battles between kings

And dreams of fear!  Look at these dreams of mine!

I come to you from the Black Sisters’ home

I like the wording of this.  It’s very poetic. Sadly, that does not make the book as a whole interesting.  It’s hard to tell what’s going on in any one paragraph. The text takes a long time to get to a point and doesn’t seem to really keep track of what it says in earlier points.