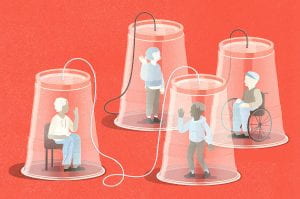 The corona virus has entered the U.S. Get ready. There have been 1,000 new cases. Now 2,000. The U.S. has reached over 4,000 cases, school is shutting down. Well, what now? We had a break from school and that was great but, what happens next? I tried not to think about it. Tried to pretend it would disappear, but that’s not how this works.

I can clearly remember the last day of normal school we had. The end of the day within reach. There was commotion everywhere as 7th graders filed into the hall to go to last period. I remember a teacher speaking to a group of students about starting spring break early because of covid? I thought I must have misheard. The corona virus would never actually get here right? I dismissed the thought and went to my next class. 10 minutes in and I hear the loud speaker turn on.

“Due to the corona virus, Spring break will start early.”

Cheers erupted all around me. I wondered if I should be part of them or if this could lead to something else. I knew the answer, I had been following the news. I pretended not to care. And pushed the thoughts away.

Update! Do all your assignments online. We would give you instructions but it’s illegal to force you onto a google meet so watch this YouTube video instead. This will go away by itself, all you have to do is quarantine for a bit.

Only half of them agreed.

School was out, but it didn’t feel right. No more traveling, no more tradition. I was at home all the time, hoping it would end. It didn’t. As the days went by, I prayed harder to go back to a normal school, something I thought I would never say. Deep down, though, I knew it would never happen. As the quarantine continued I grew bored and felt alone. I was talking on the phone for hours now and Netflix was my new best friend.

“Think about the positive,” they said. “Spend time with family” they urged.

Weeks went by and then months and I tried, but I have never felt more alone… Never felt so isolated.

At first I felt guilty for hiding upstairs in my room for so long, but after a while it became normal. Talking to family turned into a chore, and I wished I was anywhere but there.

Six months later. Six months into the new forever. We were no closer to the end, so I accepted this way of life. No more laughing and talking face to face. No more going out and exploring the world. It’s okay though because there were new things to do. I read more than before when I didn’t think that was possible. Started rereading Harry Potter and got back into “that” phase. It’s fine though because, how else am I supposed to spend the time. I wanted to accept it, I really did because I did not have it that bad compared to the terrors outside. And so I blocked out the bad… But it didn’t last.

I watched the news and heard the tragedies and saw the violence erupt. How long can you really go living in a world of hatred and disunity while staying untouched and happy. Unbothered and innocent. I will tell you the answer, not long. That will only get you to ignorance and then the positivity was a waste.

Welcome, Zoom, to this new version of life. School started, but it didn’t feel real. It was like the days were replaying over and over. Wake up, log on, stare at a screen, go to bed. Then repeat. I logged on every morning, tired and half asleep hearing the birds chirping outside and feeling the cold morning breezes coming through my open window and hearing the leaves being picked up by the wind. The only thing making me feel better was counting down the hours until school was over. Sometimes, though, I thought: Wow, this is not too bad, but that never stayed. And when school was over I felt relieved but it didn’t last long because then I had work to do. “Due by 11:59” flashed on my screen like an alarm that would never stop ringing.

Everyday there were new cases but the same old, depressing news on my screen. Confined to my cozy room all the time, but step outside and you will walk into a war no one could stop. When the cold wind started blowing and the birds flew away and when we found that covid was going to stay, that was the moment that I knew life would never be the same.

Over time I got used to the abrupt changes with school. One day everyone was at school the next, they were all home. And the repetitive schedule was starting to not seem so odd. And yes I did see the divide and yes I did notice the fights and no, I am not the same, but that doesn’t have to be bad. There is no “going back to normal” anymore. I know that and there is nothing to do but accept it. I know that this is now, the new normal.

1 thought on “A New Kind of Different”