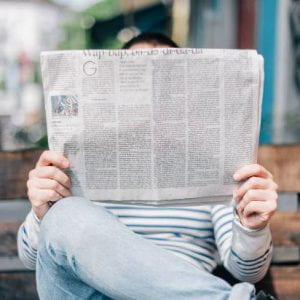 In our invaluable democracy, journalism and news are crucial. According to a Gallup/Knight Foundation survey, eight in ten U.S. adults believe news and media are critical or very important to our democracy. News and media corporations inform us and allow us to better make our democratic decisions. Unfortunately, they also persuade. They use their reporting, which should be unbiased and impartial, to suit their personal and corporate interests and agendas. You’ve seen it. We all have. And bit by bit, it’s breaking down our country’s strong foundation. In a Gallup/Knight Foundation survey, 78% of Americans believe it is “never acceptable” for news organizations to favor one party, and 58% say they see bias in news sources they turn to most often. So why is this happening? American citizens are consistently turning to and funding sources they know are not giving them unbiased information. They are allowing themselves to be fed the ground-up, strained, reconstituted and then flavored “news” that American “journalists” and news corporations are delighted to feed them. 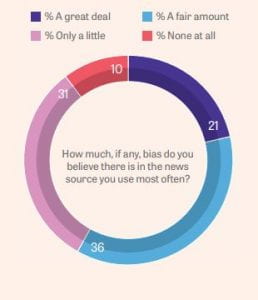 Contraversialists say that people don’t want objective news, that they want to be force-fed political baby food. That’s not the case. According to a Pew Research study, 75% of American adults want unbiased, objective news.

Imagine this and you’ll better understand the urgency of this growing problem: two siblings are playing together. One pushes the other and in return, the other sibling steals his shovel. Both, upset, run to their mother. “He pushed me!” one wails. “He stole my shovel!” wails the other. The mother, not knowing what to believe, because she didn’t see it happen and got two versions of the same story, sends the pusher to bed and hugs the shovel-stealer, promising they won’t be pushed again. That’s not quite accurate. But the mother is casting her ‘vote’ based on two biased perspectives.

This is what’s happening in our democracy. We’re allowing our news to be strained, mashed and mixed into whatever form our agenda-following “journalists” would like to feed us. So, how do we stop this crisis? It’s simple. Stop supporting biased sources. When you’re aware the news you’re reading is biased, why do you keep supporting it? By financially supporting, viewing, reading, or listening to biased news corporations, you’re endorsing their work and subsidizing them to continue spinning the fairy tales they call the news. However few and far between, there are news sources which deliver unbiased reporting. Those deserve your precious funding, time and energy. Every time you support a biased source, be it a newspaper, radio or TV station, or online source, you are subsidizing the bias cycle, allowing it to thrive and survive.