The Police have always been the protectors of our cities and towns, but recently the police have been viewed as terrible and bad people. Unfortunately they have not been able to defend themselves against the media and many officers have quit. More than 77 in less than 2 months according to KSat News. There have even been protests to defund them. According to Statesmen News, as of August 10 2020, The BLM movement has caused $8 billion worth of damage, 36 people killed and over 1,000 injured. This much damage was caused because of the RoE, which according to the Website Newone, the police officers were not allowed to use things such as rubber bullets and tear gas until these “protests” became riots and people started to destroy things. Worse, these police officers were not allowed to do mass arrests making it easier for people to get away with looting and destroying property. It has already been hard enough for shop owners to make money, with the pandemic and all, but with these looters it would be twice as hard.  For those who did actually get arrested, in places like New York, they were let free the next day. To me this made no sense. 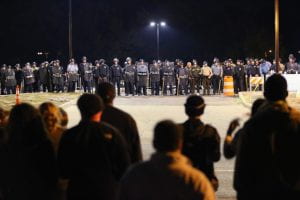 One way we could stop this is changing the RoE. It has interfered with the police and has not allowed them to prevent damage and have less people get hurt. And to make matters worse the media has forced many people against the police and many are afraid to arrest people because they believe that they will have trials and be sent to jail. Thankfully many officers have not been sentenced yet but it is still possible. If the police force would change the RoE so that officers can use things like crowd control and do mass arrests, we wouldn’t have large “Protests” that cause damage.With that being said they should make it so if the majority of the crowd is causing damage they should be able to do a mass arrest. But some crowd control things should not be used like military grade vehicles and other things like that but I think that they should at least be able to use things like rubber bullets and tear gas to control the crowd. You could make the argument that they should not be allowed to use them because in the RoE the first rule is to save human life and to not hurt people but if they are causing damage and could be hurting other people they should be able to use something to stop them. The RoE should be changed so that police officers can make our country a safer place.

1 thought on “The Police should change the RoE”