It’s an average day, and you’re scrolling on a social media app. But today is different from the rest. Today an antisemitic post will be on your page.

This event, as obscure as it seems, happens often. According to the Anti Defamation League, “4.2 million anti-Semitic tweets were posted and reposted on Twitter,” in a span of a year. This may seem like a small number, but each of these tweets go against the twitter guidelines.

Twitter’s guidelines explicitly say that you can not “promote violence against, threaten, or harass other people on the basis of race, ethnicity, national origin, caste, sexual orientation, gender, gender identity, religious affiliation, age, disability, or serious disease,” but the majority of these posts do. Twitter is not doing anything about these posts even though they are breaking the rules. And Twitter is not the only oblivious social media app there is.

According to the New York Times, “A search for the word “Jews” displayed 11,696 posts with the hashtag “#jewsdid911,” claiming that Jews had orchestrated the Sept. 11 terror attacks.” This search was done on Instagram, another app claiming to have strict guidelines against this type of behavior. They stated in their guidelines that, “We do not allow attacks or abuse based on race, ethnicity, national origin, sex, gender, gender identity, sexual orientation, religion, disability or disease,” but their actions, or lack thereof, regarding these posts prove otherwise. 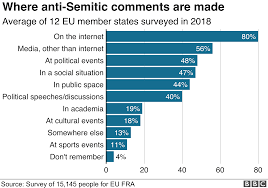 Every single one of these posts were on a public account, anyone can see, if they weren’t, the New York Times or the ADL would not be able to report it. These atrocious posts don’t follow the guidelines even though they, supposedly, have to.

Online antisemitism is not only spreading hate and violence, but is also omitting an important piece of Jewish history. As stated by the ADL, on Facebook there are multiple groups claiming that the Holocaust didn’t happen. One group called the “Holocaust Revisionism” has over 1.9 thousand members. This group has been accumulating members since December 2013, so for almost 8 years this group has been spreading hate and no one has done anything.

They must alert people of these regulations repeatedly. They have to take down any posts that violate them. By doing this, users of the app will no longer be unaware of the consequences of disobeying them.

People are posting without thinking of the consequence. Which, according to the apathetic actions of social media apps, there seemingly aren’t any.

Not doing anything isn’t the same as posting but it can still have the same negative impact. So, please, report and take down antisemitic posts that go against these guidelines.

1 thought on “Antisemitism on Social Media Needs to Stop”