Genocide: the deliberate killing of a large number of people from a particular nation or ethnic group with the aim of destroying that nation or group.

Imagine being held mercilessly captive, desperately fighting for survival, have labor forced upon you, become “re-educated,”  be interrogated, undergo psychological indoctrination, suffer from waterboarding, have your organs harvested, sexual abused, terribly die, and several other methods of unfathomable destruction due to their religion – that’s the situation for the Uyghur and Turkic Muslims in China.

This is the definition of a genocide.

Clearly, Muslims are being targeted based on their religion because they’re the only ones being held captive!

According to Canada’s Subcommittee on International Human Rights, estimates show that roughly 2 million struggling Uyghurs and Turkic Muslims are held in concentration camps.

How would you feel if you were one of these people? I would feel powerless, as if nobody could see my pain.

Furthermore, according to the organizers of the Feb. 24 event, co-hosted by the International Coalition to End Transplant Abuse and the Victims of Communism Memorial Foundation, for the last two decades the CCP (Chinese Communist Party) has been ‘systematically executing on demand’ to provide organs for transplantation. People are dying, brutally, painfully enduring torture, forcefully getting their organs harvested, taken away from their families, for what: being an innocent Muslim? 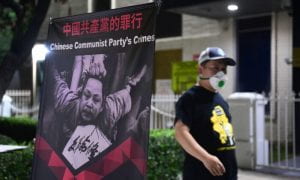 To make it worse, the U.S. Congressional-Executive Commission on China explains it as “the largest mass incarceration of a minority population in the world today. This is simply unjust.

It is clear that this has been running for too long (since the 1950’s), and despite the delay, government officials need to and have the power to put an end to this trouble.

In order to save the suffering Uyghur and Turkic Muslims from this unjust, deliberate situation, CCP, the government of China, and governments all over the world need to free these people from this nightmare of torture, also known as a genocide.

Despite the fact that the U.S. and many other countries called out this horrific behavior, it doesn’t change the fact that 2 million people are held in these camps!

The CCP had the power to start this mess, therefore, they and the governments all over the world have the power to put an end to this madness. Now.