In 3rd grade I had reading specialists help me. Once while working with her, she had to help me out for a little longer than usual, so I had to stay in for lunch. My lunch was always in a plastic bag, so when I went to throw it out she stopped me. She said to “recycle that! If you recycle you will reduce your carbon footprint”! I listened to her but I was perplexed. I asked her ¨what could one plastic bag do¨? She then gave me a long explanation on how recycling helps stop global warming. This made sense to me at the time, but the truth is that is only partly true.

Carbon footprint is the total emissions caused by an individual. It is used as a way for you to improve yourself. But what’s interesting is that, carbon footprint was not made by a recycling activist group or a government. It was made by British Petroleum, one of the biggest oil companies.

According to Rebecca Solnit a writer for the Guardian “Big oil coined ‘carbon footprints’ to blame us for their greed.” It’s not like BP is a very earth continuous company, they have one of the worst track records in the world. They obviously want to lie to you in order to dodge blame. Like a toddler blaming their older brother, they’re not fooling anyone.

Exxon Mobil, the biggest gas company in the world, knew what they were doing to the environment. ZME Science wrote an article about researchers hired by Exxon to do a study on the impact on their environment . They found that they were contributing a lot to Global warming. Exxon, knowing this was bad for business, hid the results and promoted anti global warming campaigns. They did this to avoid the consequences of their actions. This happened in 1971, 51 years ago.

Out of the top 3 countries that emit the most carbon emissions, 2/3 are developing nations (China and India). Developing countries are very susceptible to emitting a lot of carbon. Non-eco friendly sources of energy are very cheap, thus allowing them to get more energy for all the new products. Without it these nations would not be able to get the growth in their economy. The response to these nations have been terrible. Instead of making them use better energy sources and supporting their economies when they switch to renewable, governments have done pointless finger wagging. They will continue to use fossil fuels, until we do something. 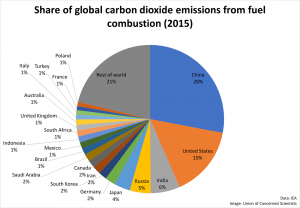 America should invest less into recycling and carbon footprint, which are not the main issue and focus more on the real culprits. If we don’t, it will be our downfall.